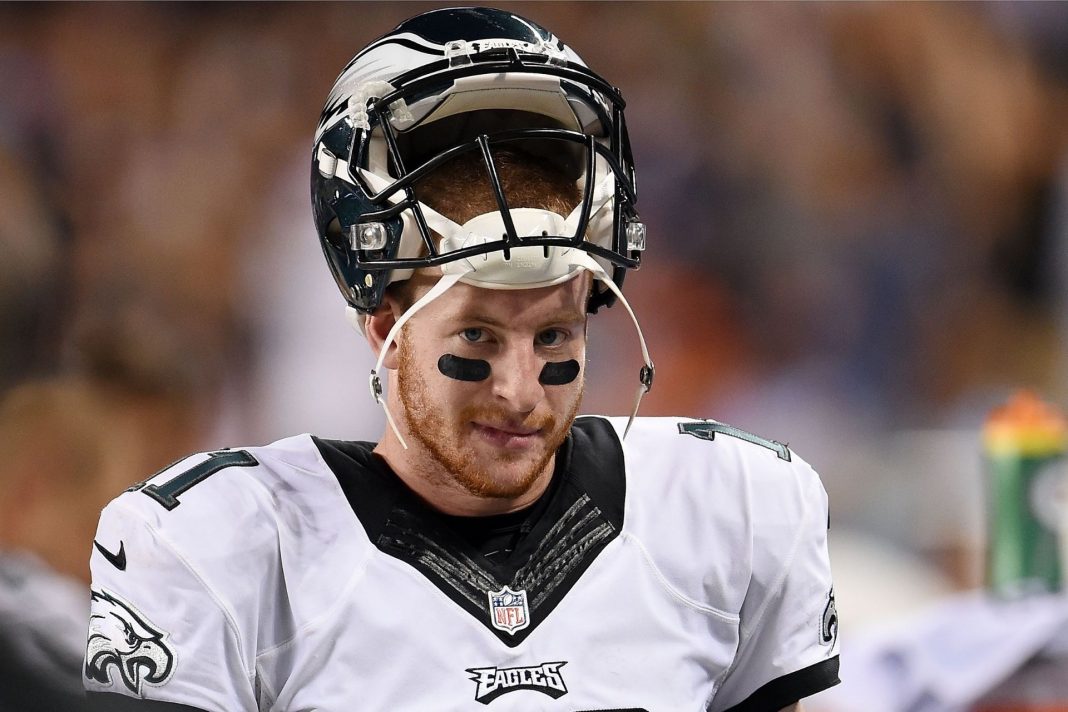 It’s no secret that many in the sports media have made the conscious decision to interject politics and social issues into sports coverage.

You simply cannot enjoy much, if any, sporting events or coverage without having a political agenda shoved down your throat.

And the latest example of just how far the sports media is willing to go to shoehorn an agenda into their content comes from a CBS Sports race baiting reporter who claims this awful quarterback isn’t being criticized because he’s white.

Through his first three seasons in the NFL, Carson Wentz showed flashes of being a good franchise quarterback capable of leading the Eagles for years to come.

But injury issues, as well as questions about his accuracy and consistency, always lingered.

Those question marks were enough for the Eagles front office to draft Jalen Hurts in the second round of the 2020 draft for the sole purpose of serving as an insurance policy for Wentz.

Once this NFL season kicked off, the Eagles worst fears were proven true, as Wentz struggled mightily for the first 12 games of the season before the team finally benched him in favor of Hurts.

Now the Eagles are faced with a situation where Hurts has proven that he deserves a chance at being their starting quarterback long-term, while Wentz still has a contract that will pay him a guaranteed $70 MILLION through 2024, essentially forcing him to serve as a highly paid backup.

But Wentz has made clear that he would prefer to have a fresh start with another team, as opposed to sitting on the sidelines.

And since Wentz has asked to be traded, CBS Sports’ Jonathan Jones is under the impression that he should be heavily criticized for behavior “unbecoming of an NFL quarterback” and would be criticized for simply asking for a trade if he were black.

“Carson Wentz’s behavior is unbecoming of an NFL quarterback who’s supposed to be a beacon of leadership,” Jones wrote. “And it would be unacceptable if he were Black.”

“For the last few weeks, as reports have trickled out about the Eagles quarterback’s desire in being traded elsewhere and topped by his declination to tell his side Monday, these are the only two conclusions I could come to.”

According to Jones, Wentz wanting a fresh start after playing poorly for a season, despite having success in previous years – which Jones admits – is “audacious” and “shows a level of privilege that can only be attained if you’re white.”

Jones attempted to make his case by pointing to other black quarterbacks who he believes were unfairly criticized, even though – in a rather ironic twist – he has to preface virtually every one by discounting the very reasons they were criticized in the first place.

For example, Jones cites Daunte Culpepper, who was criticized in 2005 for demanding a trade after sitting out with a rather serious knee injury after the team performed better with a backup quarterback.

Of course, any reasonable person would see that the Culpepper criticism may have had something to do with the criminal charges he was facing at that time, but who can say.

Quite frankly, Jones’ take is ridiculous, and as he attempted to make a case by twisting and omitting only what helped his case, he proved just how off base he is.

You could easily make the case that no quarterback in the NFL this season has been more criticized than Carson Wentz.

Just three games into the season, when it still seemed like maybe Wentz’ play could turn around, outlets like Yahoo! Sports were calling him the worst starting quarterback in the league.

The Philadelphia media has trashed Wentz every single week, peppering him with questions while blaming him for virtually every loss.

The only reason Wentz isn’t getting much criticism for wanting a trade is because it’s a reasonable request from a player that’s actually being reasonable.

Wentz not being cricitized to the level Jonathan Jones believes is satisfactory has nothing to do with Wentz being white and everything to do with the fact that Wentz hasn’t been a terrible representative of the fan base at any point, or just simply been a jerk like so many other pro athletes have throughout history.

Wentz isn’t in the media whining constantly about why it’s everyone’s fault but his own, or sitting out of practice or mini-camp until he gets his way like a spoiled 2-year-old, and he’s certainly not demanding more money after being as bad as he has been.

For any reasonable human, this difference and the fact that this has nothing to do with race is abundantly clear.

But that’s the thing about race baiters in sports media – they do not care if they’re being intellectually honest or just living in a bizarro world.

All they care about is pushing the same tired narratives they always have.