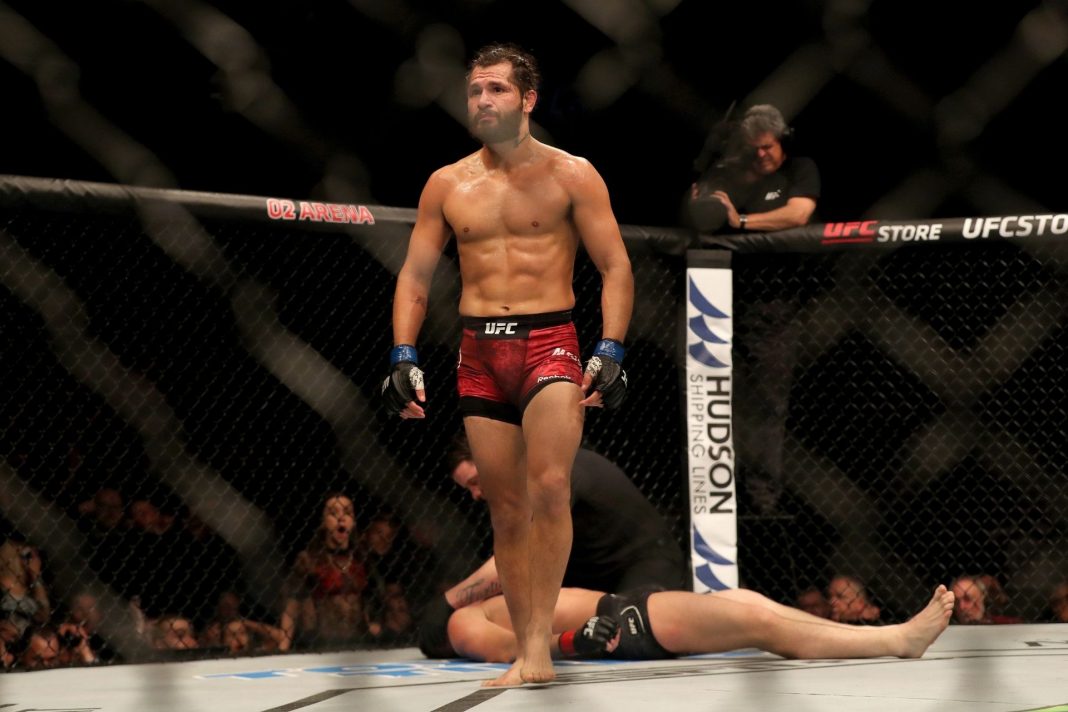 Professional athletes these days are obviously becoming more and more bold in how ridiculous their social justice takes are.

They’ve been given free rein by ESPN and the sports media to spout any nonsense they want without consequence, even if it’s not even close to reality.

But a top UFC fighter has apparently drawn a line in the sand, as he had some strong words for one former athlete-turned Social Justice Warrior.

With the SOS Cuba protests gaining worldwide attention as the Cuban people fight to be free from communism, many prominent Cuban-Americans have spoken out about the situation in their homeland, with some warning that many in American politics are pushing to take the U.S. down a similar path.

One of those who spoke out was one of the top UFC fighters in the world, Jorge Masvidal.

In a video posted to social media, Masvidal spoke about his father’s escape from Cuba at just 14-years-old, and perfectly summed up “how sh***y this communist regime, killing machine is.”

“My father escaped Cuba when he was 14-years-old,” Masvidal said. “And I’ve only heard the horror stories since I could process thoughts of how sh***y this communist regime, killing machine is. So I just want to shed some light on Cuba – big SOS signal for them.”

Masvidal also made sure to drive home the point that Cuba’s current issues with a food and medicine shortage were not solely due to COVID-19, but are rather a result of the far-Left policies the nation has been forced to live under for 61 years.

“This oppression has been going on for 61 years,” he continued. “This is not just because of the pandemic, or it’s not just because they ran out of medicine — they’ve been out of medicine and they’ve been out of resources and food because of the corrupt government and the extreme corruption over there where only a few at the top eat and everyone has to suffer. Those days have to end.”

But Masvidal didn’t just stop there, and soon focused his attention on the biggest social justice warrior the sport world has to offer – Colin Kaepernick.

After posting his video, Masvidal then took to Instagram and posted an image from 2016 of Kaepernick wearing a Fidel Castro shirt, and didn’t hold back with his rebuke of the disgraced former mediocre quarterback.

In his caption, Masvidal wrote that “cowards like this fool (Kaepernick)” should be “sent to live in Cuba” to see how he likes living under the oppressive far-Left regime. 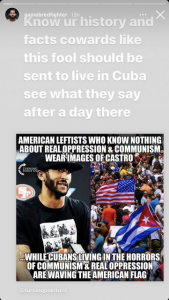 While Masvidal is one of the biggest names to criticize Kaepernick for his support of radical, oppressive far-Left political philosophies, he’s definitely not the first.

Kaepernick was rightly attacked for promoting Castro back in 2016, and attempted to weasel his way out of the consequences of his support for communism by claiming that he supported Castro’s “investment” in education and healthcare, but didn’t support the other 99.9% of his actions which resulted in death, oppression, pain, poverty, and squalor for an untold number of Cubans.

Of course, had Kaepernick not been a darling of the far-Left and their allies in the media, such a ridiculous statement would have ended his career, but because he is who he is and the media and far-Left elites agree with his beliefs, he was given a pass for supporting one of the biggest monsters in history.

Regardless, it is refreshing to see a superstar athlete like Masvidal call out the hypocrisy and ignorance of many social justice warriors like Kaepernick.

Masvidal’s family has faced an unimaginable level of hardship and pain specifically because of the exact policies and system that far-Left radicals like Kaepernick are calling for America to adopt.

They have literally lived this supposed far-Left “utopia” that Kaepernick and others believe exists, and they fled to America because it was their lone hope for freedom and a better life.

Hopefully, Masvidal doesn’t back down, and keeps the pressure on “fools” like Kaepernick.

Masvidal’s voice as a Cuban-American is critical to helping fight back against the social justice propaganda many athletes today spew with no regard for the truth or reality.

And maybe, just maybe, he can lead other athletes to finally fight back against the far-Left’s takeover of the sports world.