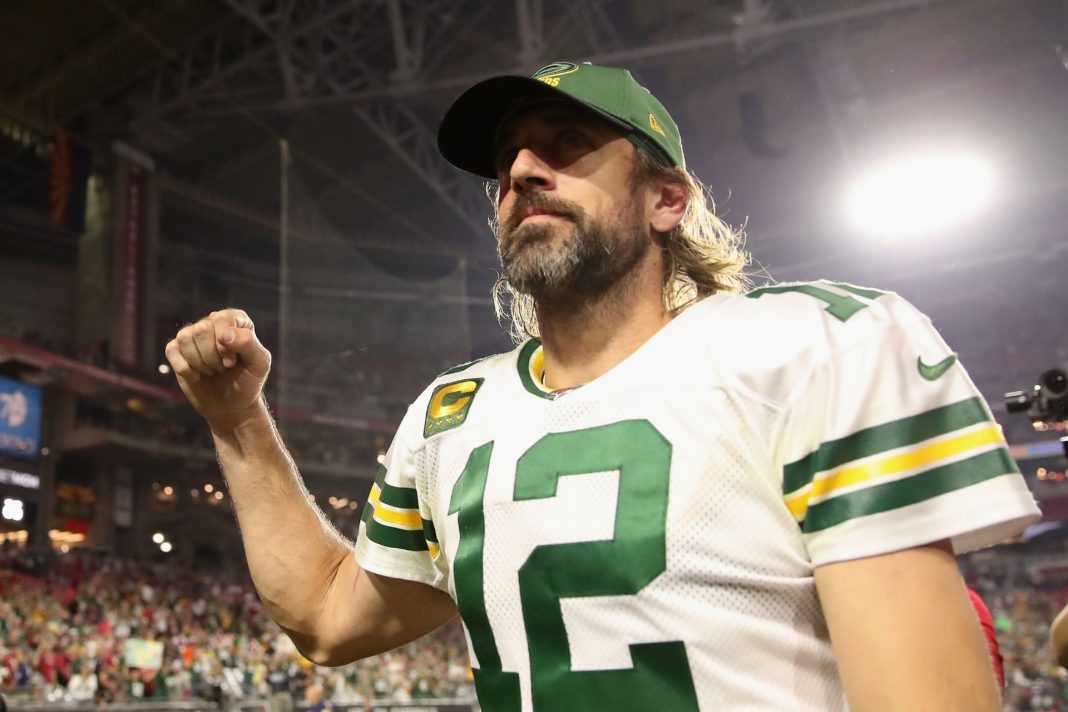 The NFL has embraced the woke outrage mob with open arms over the past several years.

Finally one of the NFLs biggest stars is standing up to the Left’s latest madness.

Now Aaron Rodgers is catching hell for going off on the woke mob, but he could care less.

The NFL couldn’t have done anymore than they have over the past several years to embrace the Left with open arms.

One of the biggest supporters of the Black Lives Matter rioters was the NFL.

Roger Goodell literally agreed to give Black Lives Matter and other Leftist groups $250,000,000 over the next ten years.

And the NFL has joined the woke outrage mob in ramming the Left’s radical agenda down our throats in every instance that they can while we watch the games.

I like it! Back of @nfl helmets:
Stop Hate, Black Lives Matter, It Takes All Of Us, End Racism.#BlackLivesMatter #BLM pic.twitter.com/nFtxt72Rqw

But the NFL has gone so far to the Left that even some of the players are now fighting back.

The NFL was eager to announce their strict vaccine mandate on their players and staff earlier this year.

Most notably has been Cole Beasley, as he has fought against the mandate since the summer months.

Here is the full and controversial statement from #Bills WR Cole Beasley, on vaccines and much more: pic.twitter.com/OuNyrtt7Nz

But now one of the NFL’s biggest names is taking a stand.

Many social media hags earlier this week railed against Aaron Rodgers for not getting vaccinated after it was revealed he tested positive for coronavirus and is facing a mandatory 10-day suspension as an unvaccinated player.

Well, Rodgers hasn’t been taking the criticism lying down and went on The Pat McAfee Show to give them hell.

When asked about his vaccine status, Rodgers went off saying, “I would’ve said, ‘Look, I’m not some sort of anti-vax, flat-earther. I am somebody who is a critical thinker, you guys know me, I march to the beat of my own drum, I believe strongly in bodily autonomy.’”

Rodgers continued, “I believe strongly in bodily autonomy and the ability to make choices for your body, not to have to acquiesce to some woke culture or crazed group of individuals who say you have to do something. Health is not a one-size-fits-all for everybody.”

You can watch the rest of Rodgers comments below (and his comments won’t disappoint):

"I'm not an anti-vaxx, flat-earther.. I have an allergy to an ingredient that's in the mRNA vaccines. I found a long term immunization protocol to protect myself & I'm very proud of the research that went into that" ~@AaronRodgers12#PatMcAfeeShowLIVE pic.twitter.com/FDMmI5rZmO

Rodgers isn’t taking it anymore and the Left doesn’t know what to do about it.

So now they are just trying to question him even more and make fun of his intelligence all while they gleefully support a President who might have shat himself while visiting the Pope.

Will the @Depend logo be painted on Air Force One? Or will the name be changed to Air Force #2? pic.twitter.com/jqf2cfJMRu