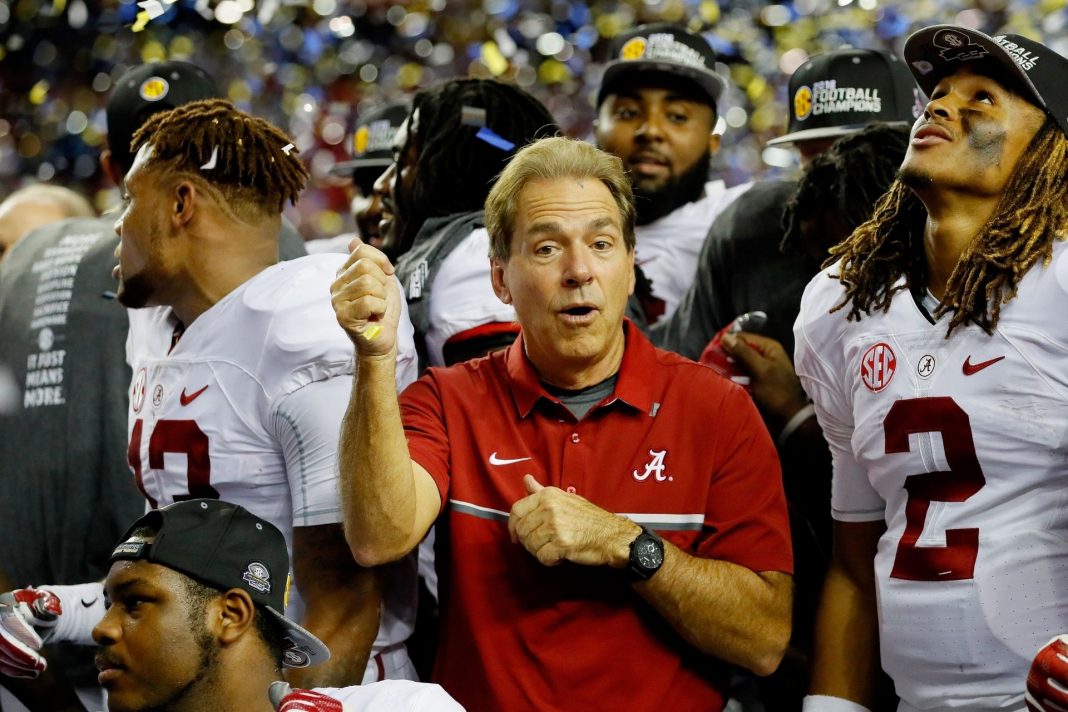 Football coaches can often be rather odd human beings.

They’re football guys through and through, and can’t be bothered with the trivial matters normal humans occupy their time with.

And no college football coach epitomizes that fact more than Alabama’s Nick Saban. But he’s now going viral for an unbelievable reason.

Over the course of his legendary career, Nick Saban has made it clear that at the end of the day, he really only cares about two things in life – football and his wife, Miss Terry.

As big of a control freak Nick Saban is when it comes to every aspect of his program, even down to the most minute details, there’s no doubt who is in control when he’s at home.

But while Saban is generally not the most eager to talk about anything that doesn’t deal with what happens on the football field, he’s now going viral for an epic story he recently told about Miss Terry’s ex-boyfriend.

Speaking at a recent coaches conference, Saban told the story of his efforts to land a date with Miss Terry almost 50 years ago.

As Saban tells it, since the seventh grade, he wanted nothing more than to get a date with Miss Terry, but he was a country boy from the wrong side of the tracks, constantly covered in grease from working at his father’s service station, and she always seemed to be dating the same guy, Mickey Schafer.

Eventually, Saban finally got his shot and the rest is ultimately history.

But a few years ago, his hometown held a “Nick Saban Homecoming” event, and while him and Miss Terry were back in West Virginia, he found out that her ex-boyfriend now owned a service station.

“So I said, ‘I am not going to miss a chance to do a drive by’ just to make sure she kind of knows how she picked,” Saban recalled. “So we drive by Mickey Schafer’s service station, and I said, ‘See there, honey, there’s your boy Mickey Schafer. If you’d have married him, that’s where you’d be now.”

“She said, ‘Bull sh*t, if I would’ve married him, he’d be the head coach at Alabama now,” Saban said to raucous laughter from the crowd.

That’s just an unbelievable, next level story from Nick Saban.

Literally the entire story from start to finish was awesome, and makes Miss Terry even more of a legend than she already is.

Nick Saban has rarely ever celebrated as much as most seven-time National Champions would, always choosing to immediately shift his focus to the next season as soon as possible.

But the one time he wanted to take a minute to kind of have a little fun with his wife and reflect on how far they’ve come since he was working at his own father’s service station, Miss Terry put him right back in his place.

It simply doesn’t get any better than that.