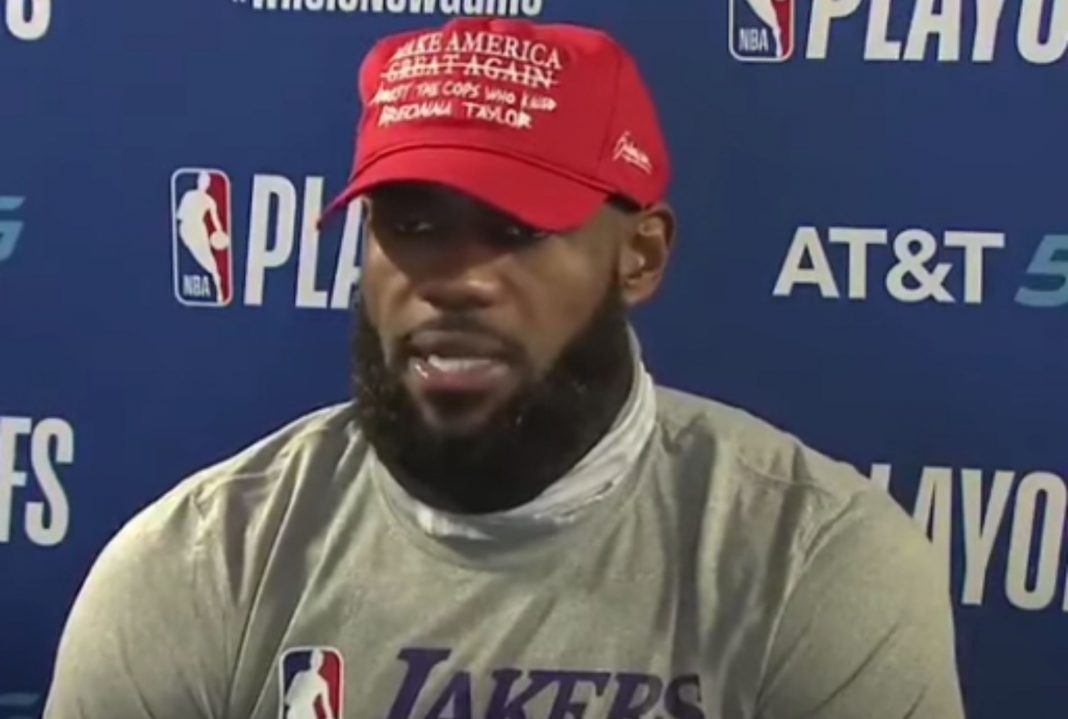 LeBron James is known as one of the biggest Trump haters and social justice warriors in all of sports.

That’s why no one could believe their eyes when LeBron James arrived for the Los Angeles Lakers first playoff game of the restarted NBA season.

And all hell broke loose when LeBron James showed up wearing this Trump hat.

LeBron James arrived at the Orlando bubble for game 1 of the Lakers’ first round series against the Portland Trail Blazers appearing to wear a red MAGA hat.

Upon closer inspection James – who previously called Trump a “bum” – had modified the hat to call for the arrest of the police officers involved in the death of Breonna Taylor.

All eyes are on LeBron James before he takes the court for his first playoff game of the season . . . and the Lakers superstar is sending a powerful message with his wardrobe:

The demand comes in the form of a modified Donald Trump “MAGA” hat … which POTUS made famous during his first campaign for presidency.

Arresting the officers involved in Taylor’s death is a new rallying cry for NBA players and coaches.

But the story is not that simple.

On March 13, Louisville police officers used a battering ram to execute a search warrant for an apartment that Taylor and her boyfriend were staying at.

Taylor’s boyfriend allegedly fired a gun at police and struck one of the officers in the leg, which led to the officers returning fire and striking Taylor.

Taylor’s boyfriend claimed she did not receive medical attention for 20 minutes but the medical examiner reported that she died less than a minute after being shot and there was no chance to save her.

To believe James and other left-wing NBA players and coaches that Taylor’s murder is being covered up by racist cops, you have to believe Kentucky’s black Attorney General is in on the scheme.

Since the NBA restarted their season amid fanfare of painting “Black Lives Matter” on the courts at the Orlando bubble and the players wearing social justice messages on the back of their jerseys, ratings are down.

James’ political activism may also be getting in the way of his play, as on Tuesday, it looked like the Lakers put more thought into their protest than their play as the top seeded Lakers dropped game one to the Blazers 100 to 93.