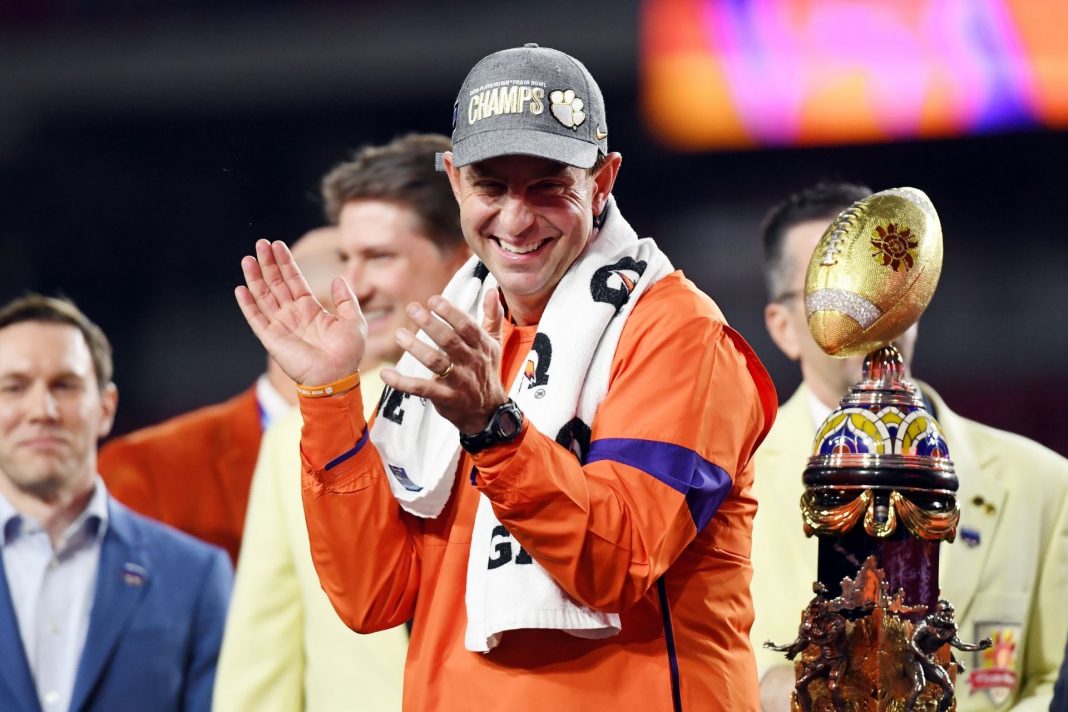 Dabo Swinney has never been one to hold back his opinions.

No matter the situation or topic at hand, if Dabo has an audience and can make a point, he’s going to seize the opportunity whether you like it or not.

And that’s exactly what happened this week when Swinney went on a national radio show and proceeded to absolutely trash Ohio State while never even mentioning them by name.

Every season, coaches from across the country put on their best politician hats in an effort to use the court of public opinion to bolster their team’s perception to either reach a more prestigious bowl game or, in some cases, make the College Football Playoff.

But in order for your team to make it to a better bowl game or reach the playoff, that obviously means there will be another team that doesn’t.

That’s where coaches like Dabo Swinney shine, as they brilliantly make their teams case, while also doing everything in their power to cut the legs out from under others.

Apparently, though, Swinney has mastered the college football politics game to the point where can do all of the above without ever mentioning his actual target.

On a recent episode of The Rich Eisen Show, Dabo was essentially asked what kind of case he would make to the playoff committee if his team lost to Notre Dame for a second time this season in the ACC Championship game.

But Swinney chose to go a slightly different way with things – he chose to make the case against Ohio State, a team that will only play a total of six games this season but is somehow still ranked fourth in the latest playoff rankings.

“My position is to coach my team, regardless of whoever,” Swinney said. “I just think there has to be some type of standard. If I was on the committee, it would be hard for me to leave out a 10-1 Texas A&M or an 11-game Florida team over a team that’s played six games. That would be hard for me if I was on a committee, but I’m not on the committee. So it doesn’t really matter.”

“It doesn’t mean they’re not a great team and couldn’t win the whole thing,” he continued. “I just think that there has to be – I just think from a big-picture standpoint, I would lean toward rewarding the teams that have been all in because it’s been an incredible challenge.”

You can watch the full clip here:

You have to tip your hat to Dabo’s mastery of college football politics because that was an absolute master class of making your point while still pulling off the “aw-shucks, what do I know, though” persona.

And despite the fact that it’s obvious this is Dabo simply playing a little political chess, he’s not wrong at all.

The Big Ten made the decision to not play football until the end of October, a full six weeks after virtually every other Power Five school in the country.

Ohio State was a part of those decisions, ultimately deciding to stick with the rest of the Big Ten by sitting out.

Yet, here we are, with less than a couple of weeks remaining before the College Football Playoff will be set, and Ohio State has only played five games so far with only the Big Ten Championship remaining.

You can make the case that Ohio State is a great team, no doubt about it, but they also have only had about half the challenge an ACC or SEC team had because they’ve literally only played half as many games.

In college sports, a team’s “body of work” is always talked about as a determining factor for a berth into any playoff, be it the College Football Playoff or NCAA Tournament.

Ohio State simply doesn’t have the “body of work” that other teams do right now, and they have nobody to blame but themselves for allowing their team to sit on the sidelines while the rest of the country played.

Love him or hate him, Dabo Swinney hit the nail on the head here.

And has undoubtedly sparked a debate that will rage for weeks to come.