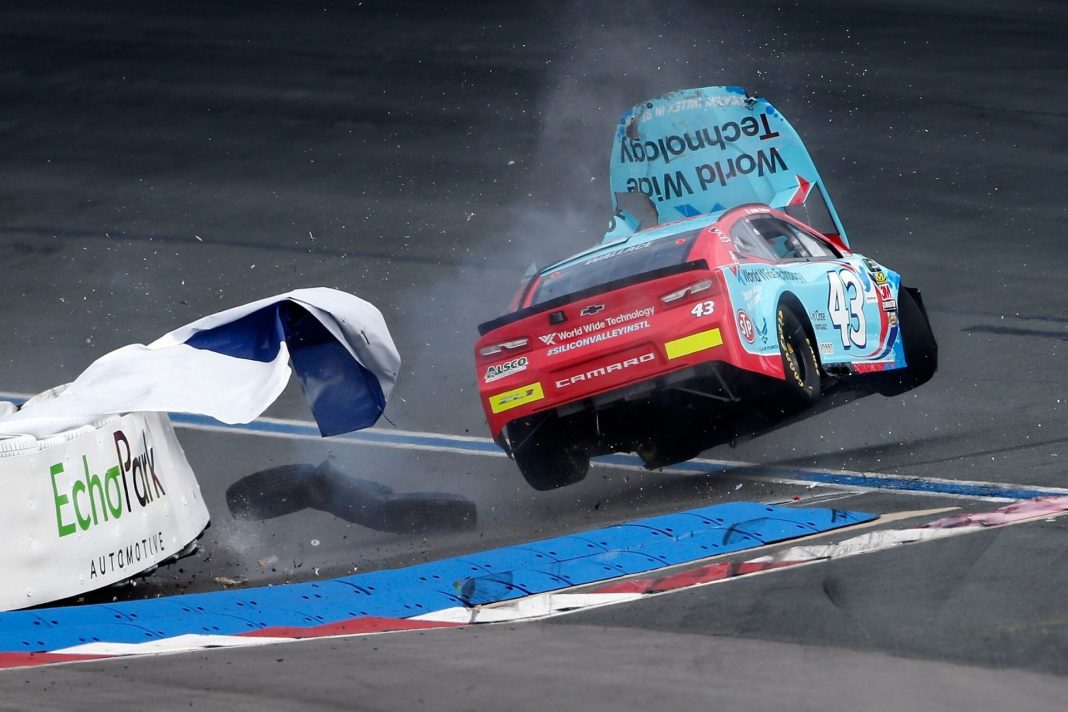 Bubba Wallace isn’t winning over many fans in the Bible belt.

Wallace isn’t known for a spirit of sportsmanship, and that bad attitude is beginning to earn him a reputation.

And in a recent example, an irate Bubba Wallace mocked Christianity in a post-race interview after an early crash knocked him out of the competition.

Bubba Wallace’s poor sportsmanship was on full display earlier this year when he rage-quit an iRacing NASCAR event that cost him a sponsor.

“I ruined so many peoples day by quiting..a video game..” Wallace tweeted.

His sponsor for the race quickly replied, “GTK where you stand. Bye bye Bubba.”

GTK where you stand. Bye bye Bubba. We're interested in drivers, not quitters.

Fast-forward a few months and Bubba Wallace is the most popular driver with the “woke” sports media for driving a #BlackLivesMatter car and leading the charge for NASCAR execs to issue a ban on fans flying or displaying the rebel flag.

Cynical observers might see this as Bubba’s attempt to simply land a new “woke” corporate sponsor . . . of course, they’d probably be right.

Wallace has never amounted to much as a NASCAR Cup Series driver – failing to ever win a race in his career. In fact, Wallace only has two top five finishes during that time, once in both 2018 and 2019.

Just last week, Wallace was racing in the 2020 All-Star Open, a qualifying race where simply finishing the race would’ve landed him a spot in the All Star Race since Bubba was leading the fan vote (likely from his new “woke” Internet “fans”).

But early on in the race, Wallace tussled with fellow racer Michael McDowell and found himself turned into the wall when McDowell clipped his bumper trying to maintain his position around the corner.

The accident made Wallace ineligible for the All-Star Race since his car was wrecked beyond repair.

After the race, a clearly irate Wallace mocked his fellow driver’s Christian faith saying he, “can’t wait for the God-fearing text that he’s going to send me about preaching and praise and respect.”

“What a joke he is,” Wallace added.

In the end, the joke may be on Wallace. As the Associated Press noted, racing fans on-hand in Bristol booed Wallace when he was introduced before the race and cheered when he was wrecked out of it.

Bubba Wallace was also booed when he was introduced, and many cheered when he crashed. NASCAR still has a lot of work to do to back up its position. The group Justice 4 Diversity held signs along Speedway Blvd. after the race.

While the press tried to frame people booing as racist – i.e. fans booing him simply because he was black – that couldn’t be further from the truth.

It had nothing to do with race. It simply comes down to the fact that Wallace has spent the last few months doing nothing but constantly insulting the fans who love the sport of racing – and they don’t appreciate it.

NASCAR fans aren’t interested in the media, “woke” corporations, or anyone else – including NASCAR itself ¬– telling them who to root for.

And it’s clear that despite the “fan vote” for the All-Star Open, Wallace’s antics aren’t winning him over any real racing fans.

Sports with Balls will keep you up-to-date on any developments to this story.