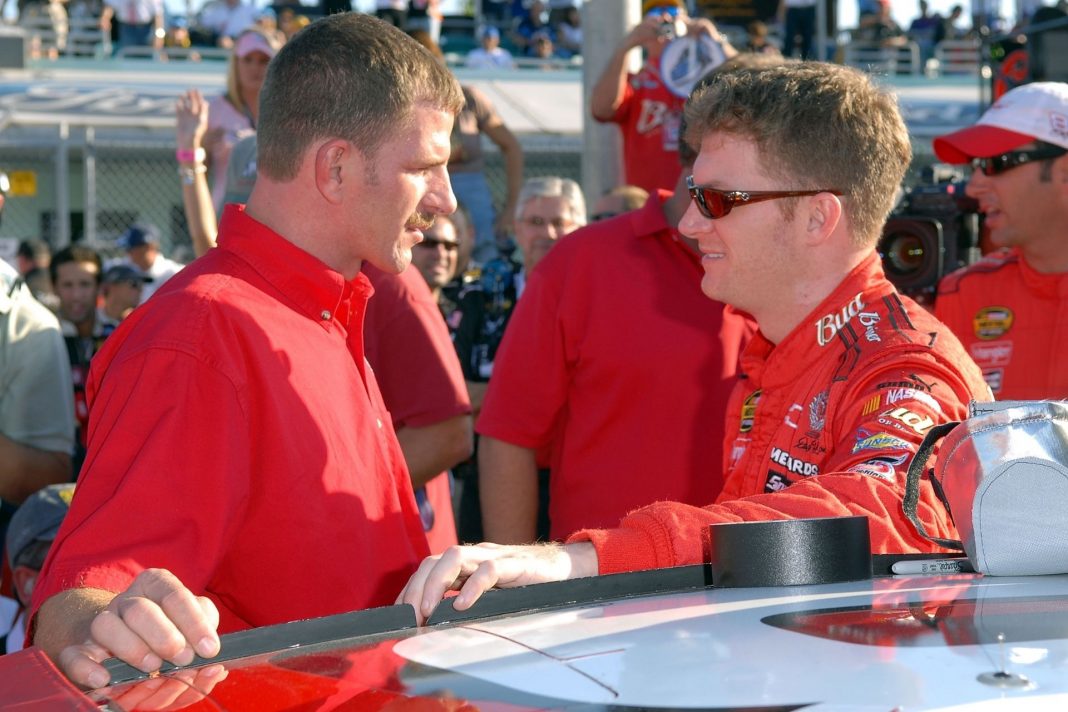 In fairy tales like Cinderella, Hansel and Gretel, and Snow White, the wicked, evil stepmother is a central figure of the story.

For Dale Earnhardt Sr.’s oldest three children – Kerry, Kelly, and Dale Jr. – the exact same is true, only it’s real life for them.

And for Dale’s oldest son, Kerry, a years-long legal battle with that stepmother over his last name has finally ended in a victory.

If you talk to most Dale Earnhardt fans, they talk about The Man In Black as if they knew him on a personal level, like old friends who routinely spent Sunday afternoons just fishing, having a few beers, and talking about life.

However, like with most celebrities, few knew what was really going on behind the scenes of his rise from North Carolina dirt tracks to one of the greatest racers the world has ever seen.

Earnhardt married his first wife when they were both just 18-years-old, had a son, Kerry, soon after, and were divorced less than three years into the marriage when Kerry was still a toddler.

For the majority of the next 13 years, Earnhardt and his son had no relationship – despite both living in the Kannapolis, NC area – thanks in large part to Earnhardt chasing NASCAR stardom and Kerry’s mother and stepfather keeping him in the dark about who his biological father actually was.

It wasn’t until Kerry was in high school that he even knew his stepfather wasn’t his real father, and not until he got his driver’s license and was free to go where he pleased that he even met Dale Earnhardt.

Shortly after meeting his father, he also found out he had two siblings that Dale Sr. had with his second wife – a sister Kelly, and a younger brother you may have heard of, Dale Jr.

After the entire family reunited, there was hope that things would get better, and for a while they seemed to be.

Kerry and Dale Jr. moved in together when they were 21 and 18 respectively, and their father helped them begin to follow in his giant footsteps in the racing world.

But, unfortunately, there was still one issue that even 20 years after their father’s death still stands in the way of them being one big happy family – Dale Sr.’s third and final wife, Teresa.

On Tuesday, Dale Jr. and Kerry got together on The Dale Jr. Download to talk in-depth for the first time – both privately and publicly – about the years they were apart and didn’t know one another existed, the years after they met when they were able to finally be brothers, and the years after their father’s death, almost all of which carried a central theme of being made more difficult by that stepmother.

Now, it’s important to note that the fact that the now former Teresa Earnhardt has been the wicked, evil stepmother you read about in fairytales to Dale Sr.’s three children that she didn’t give birth to is no secret in the NASCAR world.

The rumors, speculation, and news stories of her role in making Dale Sr.’s childrens’ lives as difficult as possible since their father’s death have literally been around from almost the moment former NASCAR President Mike Helton famously told the world, “We’ve lost Dale Earnhardt.”

The Earnhardt children haven’t been entirely open publicly about everything involving their stepmother – most likely out of fear of yet another lawsuit – but with his podcast, Dale Jr. has at times made rather clear that his departure from his late father’s Cup Series team, Dale Earnhardt Inc., was her doing, while alluding to other issues she’s caused the family.

Regardless, on the podcast with his famous younger brother, Kerry opened up publicly for the first time, telling stories like the first time he went to his father’s house at 16-years-old and knocked on the door, only to have Teresa answer the door and promptly slam it in his face.

He also told the story of the day his father died in 2001, and how he received a phone call just hours after he found out his father died telling him that Teresa was firing him as a ARCA driver for Dale Earnhardt Inc.

Think about that – hours after his father’s death when she was supposedly in mourning of her husband’s death, Teresa Earnhardt was already plotting to fire his oldest child, which pretty much tells you everything you need to know about her.

Yet, as diabolical as that story is, the main story Kerry opened up about revolves around the legal battle he’s been in with his stepmother since 2012 over his last name.

When Kerry left behind his career as a race car driver, he got into building custom homes, calling the homes he and his wife designed the Earnhardt Collection, you know, since it’s his last name and all.

But Teresa, who doesn’t have a lick of Earnhardt DNA coursing through her veins, sued Kerry over his use of the Earnhardt name, claiming it would violate all the Dale Earnhardt trademarks she solely owns.

Kerry initially won in court, with the judge – and even some of Teresa’s own witnesses in the case – admitting that there was no way it caused any confusion with the Dale Earnhardt trademarks, and that it was insane to stop a man from using his last name for his company.

That didn’t stop Teresa, though, as she appealed the decision all the way to federal court in Washington, D.C., this time changing her argument that a surname couldn’t be trademarked.

As Kerry told it on the podcast, it was a draining, drawn out legal battle that really never had to occur, but that just wouldn’t be Teresa’s style.

The story was big news in the NASCAR media throughout the legal battle and up until the appeal, but since then there haven’t been many stories on the feud.

But during his talk with his brother, Kerry told the world, and apparently his brother, for the first time that the legal battle was finally over, and that he was now free to use his last name without issue.

The judge in the appeal ruled that Kerry couldn’t trademark his last name, as no one is allowed to trademark a surname.

However, that also means that Teresa cannot trademark the Earnhardt last name either, meaning that she hilariously made an greed-fueled argument in court to stick it to her late husband’s son that ultimately cost her more than anyone.

It’s undoubtedly a huge victory for Kerry, and the rest of Dale Sr.’s children that Teresa didn’t give birth to, and a huge loss for the wicked stepmother.

And there’s no doubt that every NASCAR fan who has spent the past 20 years loathing the woman who tarnished Dale Earnhardt’s legacy, destroyed the race team he built with his sons as his drivers, and made the lives of his children a nightmare, are now rejoicing at her latest defeat.

The greed that has fueled her existence for decades was finally her downfall, and the irony of that couldn’t be more sweet.