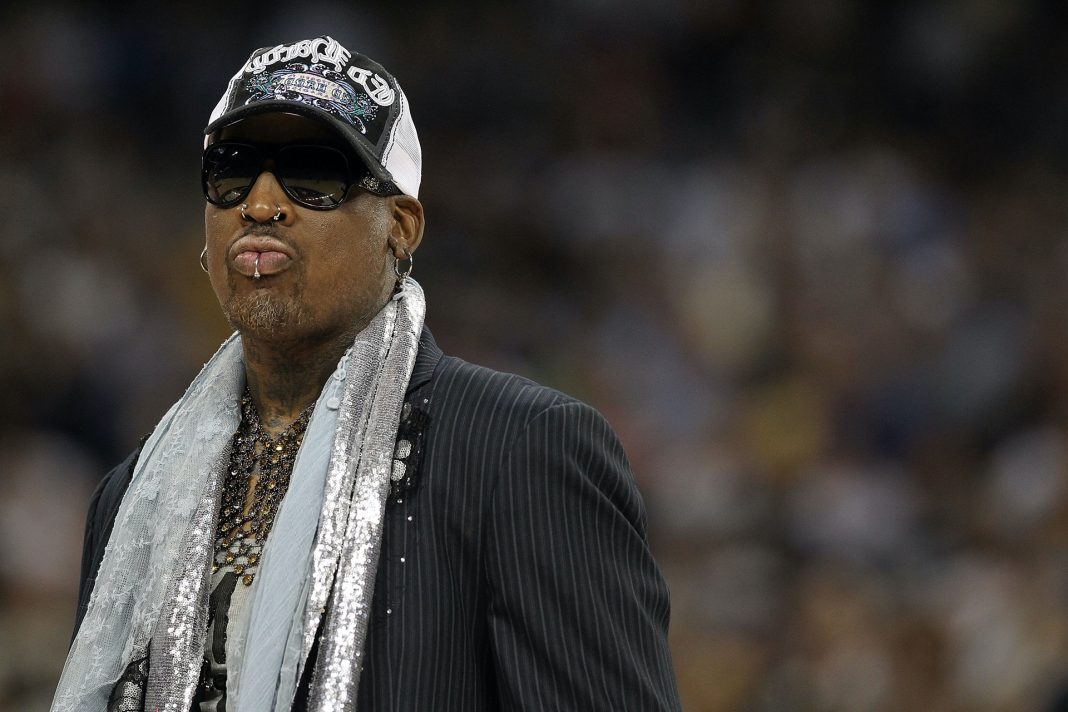 Perhaps it was bound to happen with the government-imposed shutdowns over COVID-19 cancelling sporting events.

“We’re not f–king animals,” Rodman said in an Instagram video, asking viewers to stop all the rioting, looting, and vandalism happening nationwide.

“It’s a bad situation and I think that we should all understand there’s a new generation,” Rodman said. “People my age knew about the Rodney King thing and things started to happen. People looting, setting fires, damaging people’s homes, businesses, stuff like that.

“And now we have this incident. I think someone needs to come out and say, ‘Hey guys, why are we looting Why are we stealing? Why are we creating more issues, more problems, stuff like that. Let’s get to the head of what’s really going on,’” Rodman added. “This is a bad, bad situation. You’ve got to protest in the right way. You don’t have to go and burn down things, steal things, burn things, stuff like that. We have to keep things together. We’ve got enough issues with the COVID virus right now. We have enough issues. But for this to happen right now, it just add to it.”

When the tattooed, wedding dress wearing, dyed hair, wild man, Carmen Electra-dating party animal calls you out for being crazy, it’s a pretty big blow to the Antifa rioters.

“You got people, big corporations closing stores because people are looting. Why? Why are we doing this? Why are we hurting each other again? Why not just help each other, hold each other’s hands, and try to solve the problem? We didn’t create this problem but guess what, we can help,” Rodman said. “Especially the new generation today. The 21st-century generation. Help us as older individuals who understand this. Don’t add to it. Do not add to it.

Please America let’s stop the rioting and all come together as one. Y’all stay safe!! Much ❤️

Athletes and sports teams are being asked to weigh in on the death of George Floyd, but Rodman’s call for sanity is one young people particularly need to here.

Michael Jordan also released a statement emphasizing the need for “peaceful expressions against injustice” saying, “I don’t have the answers, but our collective voices show strength and the inability to be divided by others. We must listen to each other, show compassion and empathy, and never turn our backs on senseless brutality. We need to continue peaceful expressions against injustice and demand accountability.”

Like Rodman, Tiger Woods pointed to the LA Riots in calling out the current rioters saying, “I remember the [1992] LA riots and learned that education is the best path forward. We can make our points without burning the very neighborhoods that we live in.”

These statements make for a stark contrast from younger athletes like LeBron James who stoked the flames on social media by sharing a photo of the Minneapolis police office kneeling on Floyd’s neck next to Kaepernick kneeling during the national anthem, writing: “Do you understand NOW!!??!!?? Or is it still blurred to you??”

Whose statement do you agree with more? Rodman or LeBron?

Leave a comment below to let Sports with Balls know your thoughts on this story.