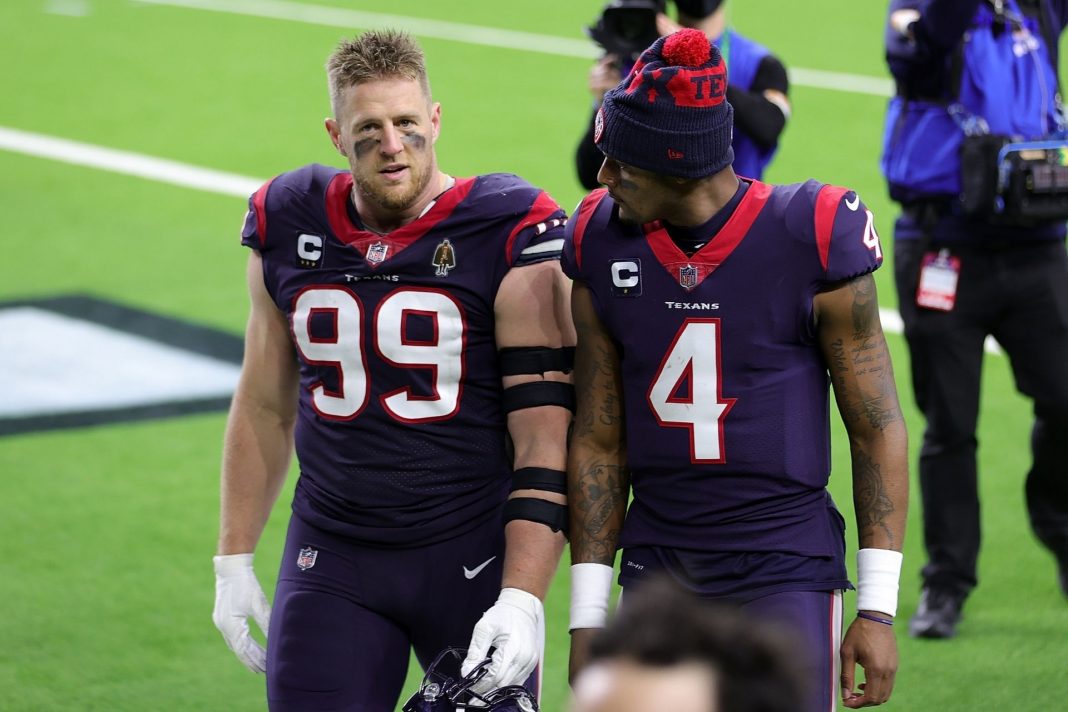 If there’s one thing the NFL has done better than most, it’s making the league a year-round storyline machine.

Few other sports have been able to grab headlines and attention during a season as successfully as the NFL has done routinely in the offseason.

And the latest example of that comes from the drama in Houston, where it appears Deshaun Watson may not be the only Texans star on his way out of town.

The Deshaun Watson saga has undoubtedly been the biggest NFL storyline since the Texans season ended about a month ago.

To summarize, Texans ownership promised Watson that his input would be used in the hiring of their next general manager and head coach, but chose to hire a general manager without ever talking to their quarterback.

After trading away their best offensive weapon – DeAndre Hopkins – during the season, and multiple seasons of essentially refusing to do what it takes to put a winning team together, the way in which the Texans went back on their promise was the last straw for Watson.

Since then, the 2020 NFL leader in passing yards has been demanding a trade, and all indications are that he has played his final game in Houston.

Losing a guy who is legitimately one of the best young quarterbacks in the league isn’t exactly the ideal offseason for any team, much less a team like the Texans who were already facing a rebuild after a dismal 4-12 season.

But if you thought things couldn’t get any worse for the Texans, you apparently thought wrong – they very much can get worse.

While Deshaun Watson’s future has been the focus in Houston, the future of three-time Defensive Play of The Year J.J. Watt is also in question.

Watt is now in the final year of his contract with the Texans, and according to a recent report from the NFL Network’s Ian Rapoport, Watt is seeking clarity from the team on his future sooner rather than later.

From @GMFB Weekend: A look at the looming decision on #Texans star JJ Watt and why the sense is that a split could be coming… pic.twitter.com/M6kojgIbEq

This latest nugget from Rapoport is just the latest bit of information that has led many to speculate on Watt’s future with the team he’s spent his entire 10-year NFL career with.

Watt has served as the “face of the franchise” throughout his time in Houston, and has been loyal to the team despite the ups and downs – but mostly downs – they’ve experienced over the past decade.

At the same time, this season was a bit different for Watt.

He routinely expressed frustrations with his team throughout the season, even going so far at one point to question the work ethic of his teammates while admitting how badly he felt for the fans who support the team.

On top of that, Watt also told reporters in early November that he has zero interest in being a part of another rebuilding process.

“I don’t think it’s any secret that I don’t have 10 years left in this league,” Watt said at the time. “I personally believe that I do have a few more great ones left in me. But you also can’t . . . I’m not looking to rebuild. I’m looking to go after a championship, and that’s what I want to do.”

It may very well be in the Texans best interest to trade Watt at this point.

He’s made clear he doesn’t want to have to wait out another rebuilding process, which the Texans are undoubtedly about to undertake, and he’s in the final year of his contract.

You could either trade him now and get a sizable return, or you can sit on him for another year while you’re starting to rebuild, and lose one of the best defensive players of his generation to free agency, giving you nothing in return.

If J.J. Watt doesn’t absolutely want to be in Houston for the rest of his career, now is the time for the Texans to make a move.