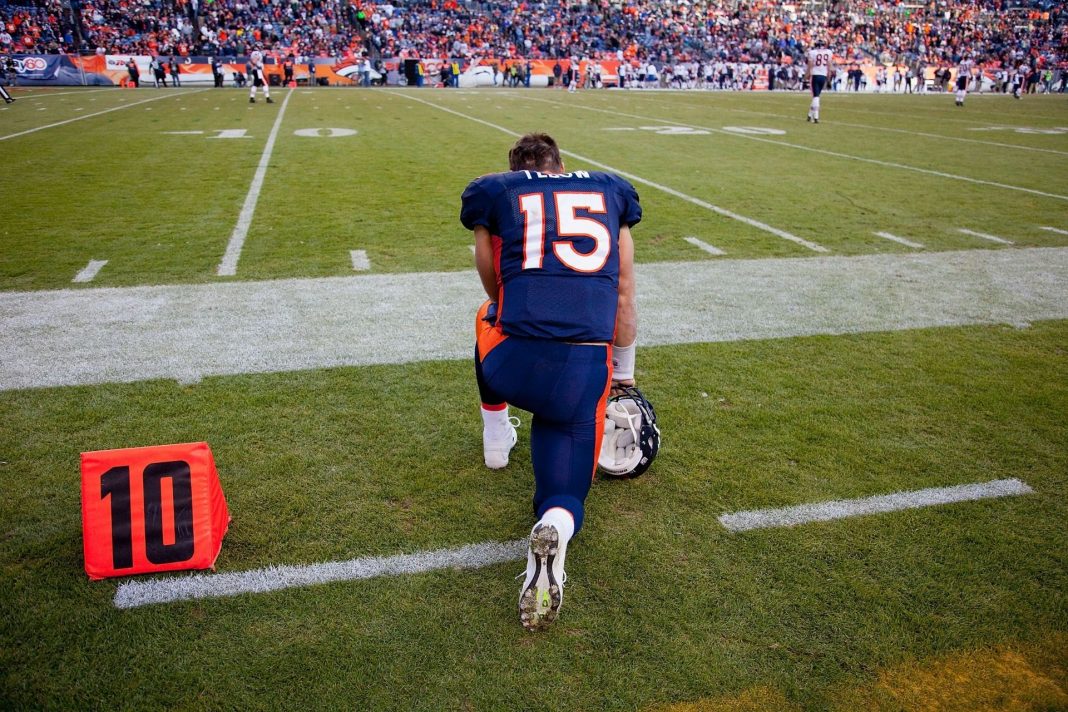 If you’ve paid attention to the sports world at all lately, you know Tim Tebow is going to try to play tight end for the Jacksonville Jaguars.

You also probably know the entire far-left, the media, and former athletes are super in their feelings about it because of Colin Kaepernick.

But everyone who is complaining about Tim Tebow signing before Colin Kaepernick is just flat out wrong.

Tebow hasn’t played a down in a NFL game since 2012 when he was with the New York Jets, and last made an attempt to make a team’s final 53-man roster in 2015 with the Philadelphia Eagles.

In that time, he’s played professional baseball with the New York Mets, and worked as a college football analyst for ESPN.

So it’s only natural for even those of us who are fans of Tebow to question why an NFL team would sign him at 33-years-old to play a position he has never played.

And obviously, Tebow haters are going to really question the decision, especially when those who hate Tebow the most are generally major supporters of Colin Kaepernick.

The move obviously bothers people like Dickerson because Tebow, a white guy, is getting a shot at another stint in the NFL before their beloved Kaepernick.

“That’s bulls**t,” Dickerson said for a third time. “That’s how the NFL is. You know, it’s different for us. I’ll say that.”

“Of course [Kaepernick] is getting punished. He’s black,” Dickerson continued. “It’s a different league for us. It’s the truth and we know it. And I hate that because it’s wrong.”

Of course, by “us,” Dickerson is referring to black players, the same black players who occupied 70% of the roster spots in the NFL in 2020, and account for the four biggest salaries in the league – all of which are black quarterbacks, which Dickerson and others would claim are underrepresented, undervalued, and disrespected by the NFL.

Also, 15 of the 17 highest paid non-quarterbacks in the NFL are black players.

Regardless, it’s clear that Dickerson and many others believe that Colin Kaepernick should have been signed by an NFL team before Tebow.

Those who are complaining about Tebow signing before Kaepernick are dead wrong to compare the two situations, though, and that’s because they’re deliberately ignoring facts.

First and foremost, let’s not get it twisted, when Tim Tebow signs with the Jaguars, it’s going to be on basically a tryout basis for the bare minimum the Jaguars have to offer, per NFL rules.

The Jaguars aren’t signing Tebow to automatically be one of their top tight ends, they’re merely giving him a chance to come to camp, and if he happens to beat out the other tight ends they’ve brought in, then great, but if he doesn’t it’s not going to really cost them anything.

It might not be what his fans and supporters will want to hear, but the Jaguars aren’t signing Tim Tebow because he’s the best player available.

This is, without question, a publicity stunt.

The Jaguars have consistently had one of the worst attendance records in the NFL, as they’ve seemingly been unable to even give away tickets to their games.

With first overall pick Trevor Lawrence coming in as their quarterback, and legendary former University of Florida head coach Urban Meyer now on the sidelines, bringing in another Florida legend merely allows the team to create even more buzz and interest in the team in the hopes that they can sell tickets.

It’s more likely than not that Tim Tebow doesn’t even make the final 53-man roster – the Jaguars know that, and so does Tebow.

But with the leadership and work ethic intangibles he brings to the table, that will help Urban Meyer establish a new culture in Jacksonville, coupled with the possibility that the Jaguars sell more tickets and merchandise, it’s really a no-brainer business decision.

That’s all it is, though – a business decision that offers upside if Tebow happens to prove he can actually play tight end in the NFL.

Truth be told, that’s exactly why the Tebow and Colin Kaepernick situations simply cannot be compared.

Colin Kaepernick has been given similar opportunities in the NFL over the years, despite what the media, other players, and the far-left will tell you, but he’s turned them down.

Kaepernick doesn’t want to take a shot on himself like Tim Tebow is doing – he wants a team to sign him off his couch and make him their starting quarterback tomorrow.

Let’s remember, Colin Kaepernick’s time in the NFL originally ended not because he kneeled for the national anthem, but because he walked away from his lucrative contract with the San Francisco 49ers.

Despite two injury plagued seasons in which he didn’t play well even when he was healthy, he wanted more money than the 49ers were willing to offer, and quickly found out that other teams wouldn’t pay his price either.

On top of that, the Ravens tried to sign Kaepernick in 2017, but Kaepernick derailed it.

As Ravens legend Ray Lewis said at the time, “We were talking about giving this kid an opportunity to get back in the National Football League. Look, this is what I wanted to share with people. I have been fighting for this kid behind the table like nobody has . . . I’ve never been against Colin Kaepernick. But I am against the way he’s done it.”

In 2018, former Broncos general manager John Elway also told those in the media who would actually listen that the team had offered to sign Kaepernick, but he turned them down.

And the Seattle Seahawks invited Kaepernick in for a workout as they explored signing him in 2018, but Kaepernick again chose to derail it.

And most famously, the NFL set up an unprecedented pro day-type workout for Kaepernick at the height of all the far-left noise in 2018, something they’ve never done for any player, so that all 32 teams who wanted to check out the former quarterback could.

However, one hour prior to the workout, after 16 teams had flown scouts into Atlanta to evaluate Kaepernick, he chose to move the workout over 60 miles away, purposely sabotaging yet another chance at getting back in the NFL.

You see, Colin Kaepernick doesn’t want to play in the NFL again because he prefers being a martyr – after all, it’s been a much more profitable gig for him than any of the NFL offers he’s sabotaged over the years would have been.

Kaepernick doesn’t want the opportunity Tim Tebow has been given, so for anyone to compare the situations and feign outrage over the so-called “racism” supposedly involved is just flat out wrong.

Why else would Kaepernick drop his lawsuit alleging the NFL “colluded” to keep him out of the league by settling for what the Wall Street Journal reported was “far less” than the $10 million he was seeking?

Even if Kaepernick lost the case, he could have easily blamed the “racist” justice system and garnered himself even more of the far-left media attention he so desperately craves.

But none of these facts matter to those complaining that Tim Tebow is getting a shot at a NFL comeback before Colin Kaepernick.

And they’ll continue to push their false “racism” narrative as long as they possibly can.