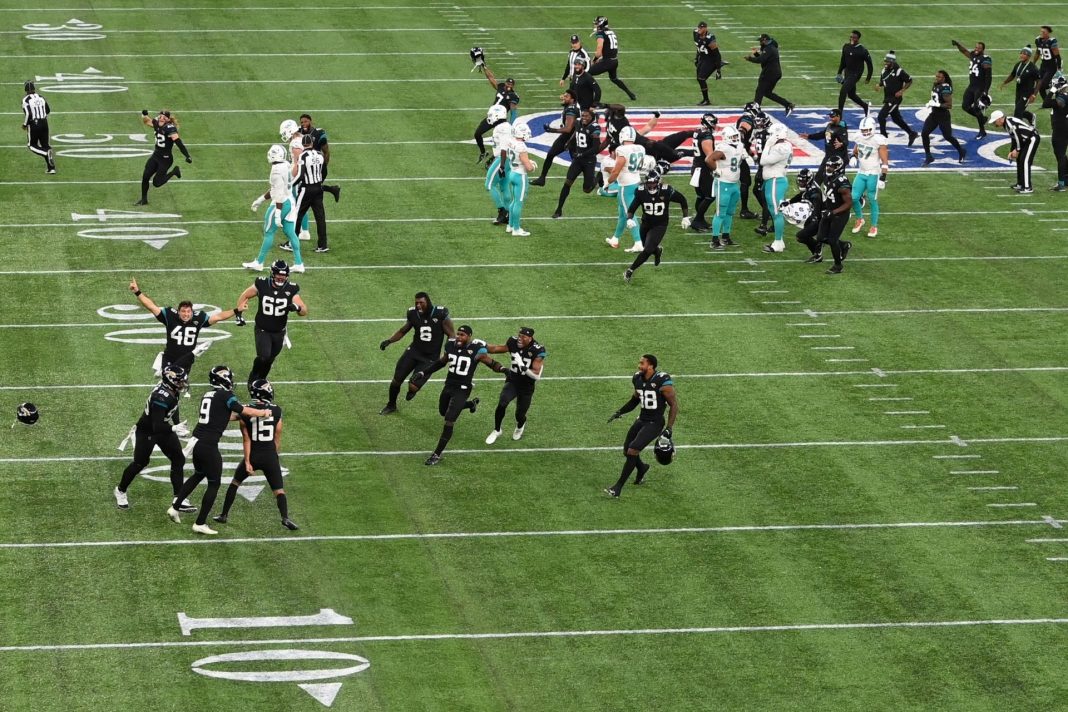 The Jaguars have sucked so bad over the past two years that they lost twenty games in a row.

That’s why the football world was amazed that they actually won a game last weekend.

And it is so shocking that the Jaguars actually won a game that even the NFL is “randomly” drug testing the team’s kicker.

The NFL has had some crappy teams in its history.

The 1-15 2007 Miami Dolphins were so bad that they couldn’t even get a good punt when they needed one.

You’d think a game that ended 3-0 would be boring but the Steelers/Dolphins Mud Bowl in 2007 gave us the best punt in Monday Night Football history. pic.twitter.com/JMGpBQESK6

Few teams were worse than the 2017 Cleveland Browns, who had a “perfect” losing record going 0-16.

Cleveland @Browns fans held a mock parade today in honour of the team's "perfect" 2017 season, during which they didn't win a single game. #DawgPound #FactoryOfSadness pic.twitter.com/of6wpqgYXv

But the 2020-2021 Jacksonville Jaguars have to be in the discussion as one of the worst teams in history as they have really sucked some butt.

Going into week 6 of the NFL season, the Jaguars had lost twenty straight games.

Literally their last regular season win was all the way back on September 13, 2020.

But miracles happened and the Jaguars ended up winning a game last Sunday in London with a 23-20 win over the 1-5 Dolphins.

The game winning field goal was an impressive 54 yarder by Matthew Wright.

But the NFL couldn’t believe that the Jags actually won a game without some type of help or divine intervention.

So the NFL decided to “randomly” drug test Wright just a couple hours after the game for his miraculous kick that ended the Jags’ 20-game losing streak.

#Jaguars kicker Matthew Wright was randomly drug tested by the NFL after making FGs from 40, 54, and 53 yards on Sunday. 😂 pic.twitter.com/yD0gFs0OA4

You know your team sucks when the NFL is even believing you cheated to win a game.