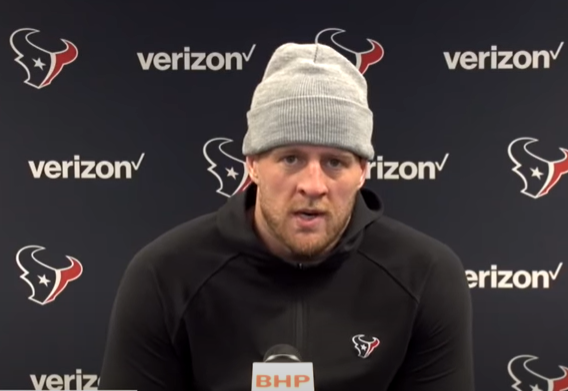 They’re the ones who have forgotten that they are amongst the fortunate humans on the planet to be able to play a game for a living and make millions of dollars in the process.

Fortunately, though, there’s at least one guy who hasn’t forgotten why they’re able to make millions of dollars to play a game. And after his latest rant, there’s no doubt fans of every team will be JJ Watt fans for years to come.

JJ Watt has long been viewed as one of the best defensive players of his generation, winning NFL Defensive MVP honors three times and being named first team All-Pro five times.

And the work he’s done off the field has been just as impressive, specifically when he raised $37 MILLION – $200,000 of which was his own money – to aide Houston’s recovery from Hurricane Harvey, and then went on to rebuild 1,183 homes, 971 child centers and after school programs, and distribute more than 239 MILLION meals to victims.

Through it all, it’s always been clear that Watt cares about Houston, and the fans that have made the life he and his teammates enjoy possible.

Love him or hate him, there’s no denying that JJ Watt would rather win a Lombardi Trophy for Texans fans than ever win another MVP trophy.

If you didn’t believe that, his latest rant after the Texans lost again this week, sinking the team’s record to just 4-11, proved it beyond any reasonable doubt.

During his post-game press conference, Watt admitted that his team played “horrendously” and then proceeded to talk at length about how bad he felt for the fans who have to watch the Texans play each week.

“We’re professional athletes getting paid a whole lot of money,” Watt said. “If you can’t come in and put work in in the building, go out to the practice field and work hard and do your lifts and do what you’re supposed to do, you should not be here. This is a job. We are getting paid a whole lot of money. There are a lot of people that watch us and invest their time and their money into buying our jerseys and buying a whole bunch of s—t and they care about it. They care every single week.”

“We’re in Week 16 and we’re 4-11 and there’s fans that watched this game, that show up to the stadium, that put in time and energy and effort and care about this,” Watt continued. “So if you can’t go out there and you can’t work out, you can’t show up on time, you can’t practice, you can’t want to go out there and win, you shouldn’t be here, because this is a privilege. It’s the greatest job in the world. You get to go out and play a game.”

While Watt’s point had definitely been made and he could have easily stopped there, he kept going, driving home the point that fans deserve better than millionaire athletes who don’t care about the team’s success.

“If you can’t care enough, even in Week 17, even when you’re trash, even when you’re 4-11, if you can’t care enough to go out there, give everything you’ve got and try your hardest, that’s bulls–t,” Watt said. “So that’s how. I think it’s – there are people every week that still tweet you, that still come up to you and say, hey, we’re still rooting for you, we’re still behind you. They have no reason whatsoever to. We stink. But they care, and they still want to win and they still want you to be great. That’s why. Those people aren’t getting paid. We’re getting paid handsomely. That’s why. And that’s – that’s who I feel the most bad for is our fans and the people who care so deeply and the city and the people who love it and who truly want it to be great. And it’s not. And that sucks as a player, to know that we’re not giving them what they deserve.”

THIS is why we love @JJWatt

That’s the kind of rant every fan wants to see from their star player, the leader of their franchise.

But when a player does care and work their butts off, even in a losing effort like JJ Watt clearly has, that’s when fans idolize a player.

JJ Watt was already going to be a hero in Houston for years to come, but with a rant like this, the people of Houston are going to worship the ground he walks on for the rest of time.