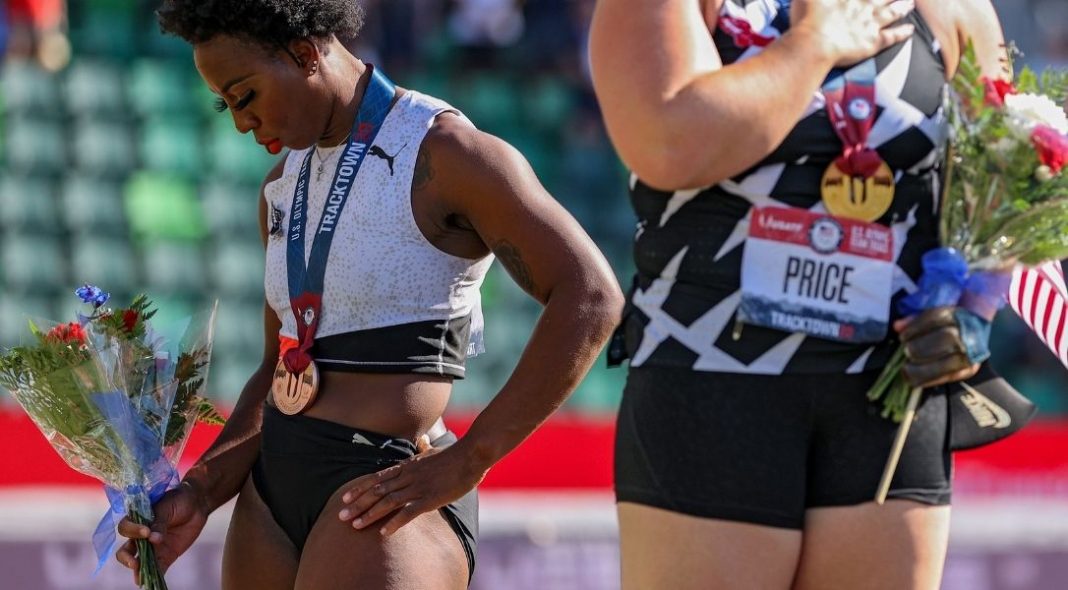 Gwen Berry made an ass of herself for protesting during the National Anthem after placing third during her olympic trials.

And Joy Behar’s latest rampage in support of Olympic protestor Gwen Berry disgracing our nation will make your blood boil.

It wouldn’t be a real sporting event in this day and age without some moron protesting our great nation.

First Colin Kaepernick, then players throughout the professional sports world jumped on the bandwagon to crap on America.

Well, the latest idiot to protest our nation during the national anthem was Gwen Berry.

During the recent olympic trials for the hammer throw, Gwen Berry placed third.

And while the national anthem started to play as the top three contenders were on the podiums, Berry decided to show her anger and turn away from the American Flag.

And Berry has made it clear that she plans on using her platform as an American athlete to protest our nation at the Olympics in Tokyo.

For her stunt, she has caught scorn from politicians like Congressman Dan Crenshaw who made the argument that she shouldn’t be on the American Olympic Team if she hates America so much.

But on a recent episode on The View, Joy Behar viciously attacked Crenshaw for questioning Berry and her disrespect towards our nation.

Behar started her rant by saying:

Well, you know, protest is the very definition of patriotism. It basically is the basis of the country. They were protesting at the Tea Party, and in the ’60s, people protested the Vietnam War, which brought it to an end. Now African-Americans are protesting, you know, the fact that people do not want to face their racist past here.

But Behar couldn’t stop there.

She had to continue her rampage as she got angrier at Crenshaw for defending our nation by saying:

The thing about Dan Crenshaw, you mentioned it in the beginning, Whoopi, he’s OK with some things. I was reading about how Tucker Carlson called General Milley a pig the other day. He called the military man who has so many medals a pig. Now, I don’t understand why Crenshaw doesn’t mention that. I understood throughout my life that the Republican Party was very pro-military. If you are so pro-military, why aren’t you mentioning that?

The other thing, it’s a complete distraction as usual. Oregon is on fire. The world is burning up. People are not doing enough to combat climate change. We’re all going to be in the same situation. I don’t hear word one about it. It should be in that infrastructure plan. It should be number one. People like Crenshaw should be behind it instead of distracting us with this nonsensical assault on this girl who is basically doing our patriotic duty by saying I am making a point here. That’s all she’s doing. She’s not hurting anybody.

So in Behar’s twisted mind it is your “patriotic duty” to disrespect our nation while trying to get on our nation’s Olympic team.

Makes a lot of sense.

But do you expect anymore from Behar and the yammering nitwits on The View?