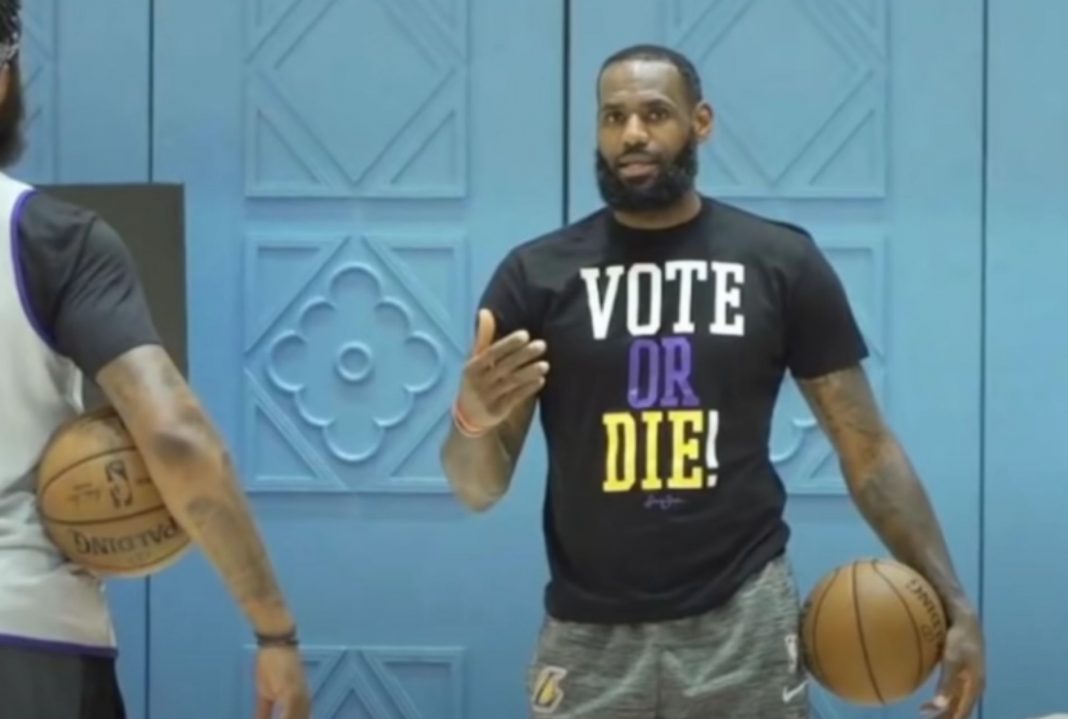 LeBron James has been doing as much politicking as playing basketball lately.

The NBA’s hard left turn politically has been a disaster for the league’s ratings.

Now James got even more political by wearing one shirt.

Years ago, LeBron James said his goal was to become a “global icon.”

He believes that in order to do that, he must cozy up to Hollywood and the leftwing mob because they control of the culture. That’s why many speculate he took his talents to L.A. in the first place.

In 2016, he campaigned on stage with Hillary Clinton, and he’s routinely attacked Donald Trump, calling him a “bum” during one rant.

This week he was spotted donning a “VOTE OR DIE” t-shirt at practice.

NBA owners have to be in freak out mode.

They’ve bent over backwards to appease “woke” players, but they won’t be able to take the hit to their wallets much longer.

Politics in sports and TV ratings have an inverse relationship. The more political a sport gets, the fewer people want to tune in.

And a recent report showed the NBA ratings have cratered with the first round of the NBA playoffs down 27 percent from last year.

First round NBA playoff ratings news: league averaged 1.94 million viewers per game down 27% from last year, lowest first round ratings in 11 years. Down 40% from two years ago, which was last time LeBron was in the playoffs. Yikes. Get woke, go broke.

After the Milwaukee Bucks boycotted a playoff game to protest the shooting of Jacob Blake in Kenosha, the rest of the league followed suit.

The playoffs were literally shut down for several days.

That’s potentially millions of dollars of advertising revenue that went up in smoke. Not to mention future advertisers will be wary of spending big dollars with the NBA wondering if players will decide to boycott again.

Behind the scenes, it was James who allegedly wanted to shut down the season entirely.

Charlotte Hornets owner Michael Jordan, a.k.a. “The GOAT,” supposedly lowered the temperature and helped convince the players to finish out the season.

They might learn that lesson the hard with the upcoming collective bargaining negotiations.

Salaries have trended up consistently, but that could be changing if the ratings remain in the tank.