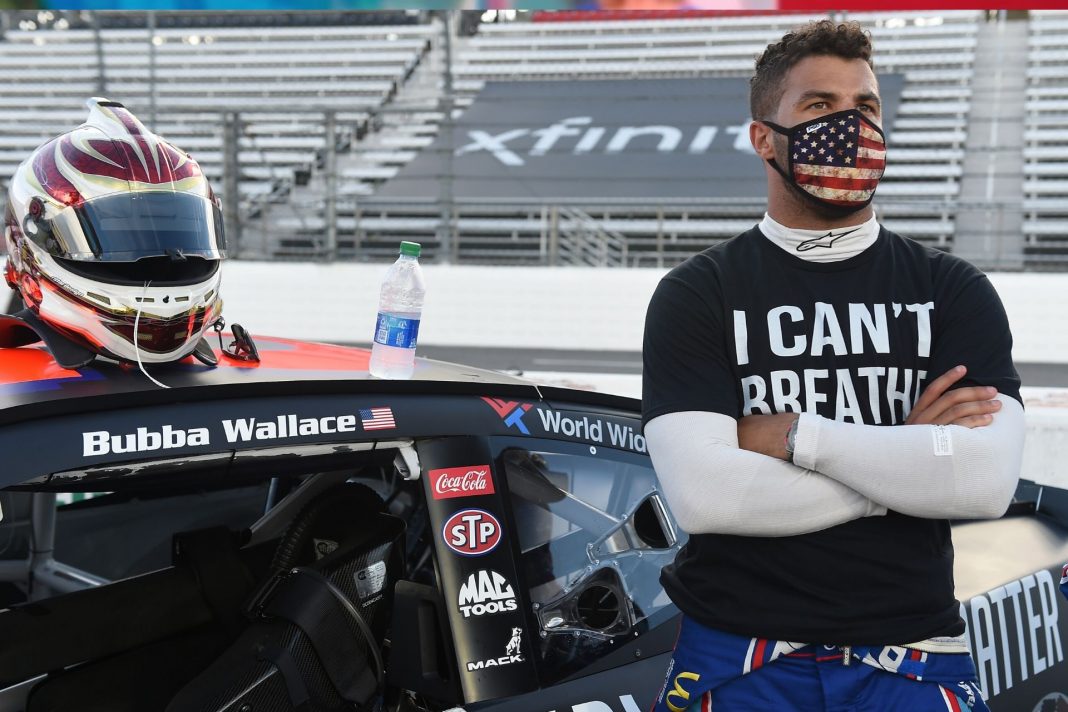 Bubba Wallace is out to prove he’s “woke.”

While NASCAR and Wallace have alienated many longtime NASCAR fans with the noose hoax and by banning the rebel flag, Wallace is soaking up his time in the spotlight.

But Wallace crossed the line by comparing NASCAR fans to Antifa rioters.

Lifetime NASCAR fans are livid over changes to the sport in the last few weeks.

Bubba Wallace, looking to earn a new “woke” corporate sponsor, latched on to the George Floyd protests by wearing an “I can’t breathe” shirt before a race.

He then went on CNN to call on NASCAR to ban the rebel flag from all NASCAR tracks.

The rebel flag, unrelated to the murder of George Floyd, has long been flown side-by-side with the American flag as a symbol of southern pride and embodiment of the rebellious spirit that gave birth to NASCAR in the first place.

NASCAR sided with Wallace and the Leftist corporate sponsors who have always despised the sports ties to the southland.

Now, many fans are planning to protest outside of races, which Wallace acknowledged was their right.

But, Wallace sneered, he doesn’t believe the police will be “pepper-spraying them and shooting them with rubber bullets” in an offensive comparison to the Antifa anarchists and Marxist Black Lives Matter rioters toppling statues, looting private businesses, and setting fire to America’s cities.

“It’s their rights for peaceful protest, my man. It’s a part of it,” Wallace said. “But you won’t see them inside the racetracks where we’re having a good time with the new fans that are purchasing their tickets, purchasing their favorite drivers’ apparel. You won’t see it flying in there.”

Wallace continued, “It’s exactly what you see on the flip side of everything going on and in cities as they peacefully protest. But you won’t see cops pepper-spraying them and shooting them with rubber bullets, will you?”

Bubba Wallace says people have the right to peacefully protest NASCAR’s ban of the Confederate flag. He adds: “You won’t see cops pepper spraying them and shooting them with rubber bullets, will you?” pic.twitter.com/u1NPqodbyg

NASCAR protesters were storming the racetracks trying to set fire to the facilities and steal or destroy cars and tools, you can bet the police would be meeting them with tear gas and rubber bullets to disperse them.

But even Wallace’s claims of “new fans” coming to races or tuning in is dubious at best.

From 2006-2014, Juan Pablo Montoya, a Columbian, raced in NASCAR but failed to ever bring in the hordes of Hispanic fans as promised. Instead, his main claim to fame was running into a jet dryer in Daytona causing a two-hour delay.

The truth is, NASCAR’s decision to further alienate its fanbase may result in short-term boost from those who are curious about the sport after so much TV exposure, but will likely prove to be a devastating blow to the sport moving forward.

NASCAR’s ratings have been steadily declining since 2005 as executives have rooted out all but a handful of southern drivers and abandoned beloved historic southern tracks.

As a result, despite the fact the sport is far more corporate than it’s ever been, there are few corporate sponsors who have agreed to sponsor more than just a handful of races.

NASCAR is desperate for more money.

And going “woke” appears to be their strategy.

Leave a comment below to let Sports with Balls know your thoughts about this story.