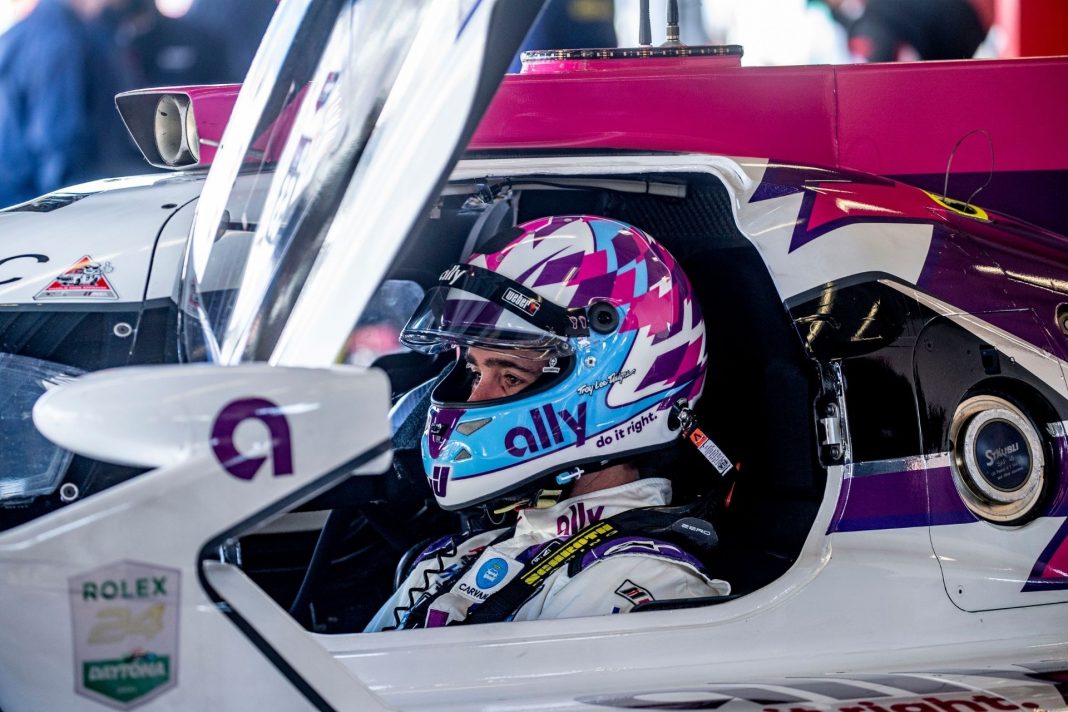 Almost no fan will ever understand how difficult it is for racers to change disciplines, especially at the age of 45.

It’s not just smashing the gas and turning a steering wheel – it’s literally breaking down everything you know and rebuilding a whole new skill set, all at 180+ MPH.

Which makes the fact that all of NASCAR’s GOAT Jimmie Johnson’s new teammates are giving him high marks for his transition to IndyCar a monumental accomplishment.

Jimmie Johnson’s career in the most challenging and competitive motorsports discipline in the world was obviously second to none.

The level at which Johnson dominated the NASCAR Cup Series – like winning five consecutive championships and a record seven total championships in just 11 seasons – has been proven to be utterly untouchable throughout the sports’ history, and that will most definitely not be changing anytime soon.

But after winning those seven championships and securing 83 wins, Johnson called it a career at the end of last season, deciding at the age of 45 that he wanted to spend more time with his family and challenge himself with something new.

So he made the decision to take on the rather insane challenge of completely switching racing disciplines and running a part-time IndyCar schedule that consisted of nothing but their road course and street circuit races.

Simply going from running no more than three road courses a season over the past 20 years to running 13 road courses and street circuits in a single season would be a difficult enough challenge for anyone, but doing it at 45-years-old is a whole other ballgame.

Not to mention the fact that virtually every aspect of the approach, technique, and skill set that is required to be fast in a 1,600-pound, 700 horsepower IndyCar on road courses is entirely different from that of a 3,500-pound, 750 horsepower stock car.

Literally everything is different, and he tried to do it all with just a few test sessions over a handful of months.

Despite all of that and some growing pains, though, Johnson’s new IndyCar teammates at Chip Ganassi Racing are all giving him really high grades for how he has made the transition to the discipline early in his rookie season.

While six-time IndyCar champion Scott Dixon wouldn’t put a specific grade on an incomplete season, he heaped praise on Johnson while admitting that he believes he’s crazy for even trying to climb this mountain.

“Just the attention to detail and just how hard he works at it,” Dixon said. “This is the toughest thing that any driver in their career can try to do. I’ve called him, in previous media stuff, a bit crazy because not many people would even take that on. So it’s huge for the NTT IndyCar Series.”

“It’s like me getting the [Indy 500 ] pole and then trying to win the Masters in golf. I’d be so far down, it’d be just ridiculous,” Dixon continued. “So I think what’s really impressed me is just his progression from weekend to weekend and the things that he picks up on it. He’s always asking questions. Just his will to learn is so big.”

Appreciate having @scottdixon9 come out to the test today to share pointers and give feedback.

Just finished reviewing his in-car footage compared to mine then took a ride on the track together to check brake points and areas to gain a little speed. pic.twitter.com/VjgueGgj3k

For their part, Johnson’s other teammates, 2004 IndyCar champion Tony Kanaan, Alex Palou, and Marcus Ericsson all gave Johnson an “A” grade for how he’s performed and progressed thus far.

“Honestly, I think what Jimmie did, to have the courage to jump on after so many years in NASCAR, I’ll grade him an A,” Kanaan said. “Not a lot of guys in his situation and his status – when he’s had seven championships – will put themselves in that position. It’s not easy.”

Even after winning the 2021 IndyCar season opener, Palou admitted that he’s even still starstruck by the fact that a world class, motorsports legend is his teammate.

“It’s crazy to think that I am teammates with Jimmie Johnson,” Palou said. “It’s been super fun having such a champion with us. It’s true that it’s a new world for him. But he’s a champion. We learn a lot from him, especially the way he works, the way he describes the car.”

“I would give him an A, to be honest,” he continued. “It’s super hard. I don’t see myself going to NASCAR after doing 20 years in IndyCar and being able not to be last.”

Needless to say, Jimmie Johnson is making a massive impact on IndyCar in his rookie season.

He’s obviously not dominating IndyCar in the way he dominated NASCAR, but that was also never anywhere close to a reasonable expectation for anyone making such a colossal transition, much less someone who’s 45-years-old.

The generational talent and work ethic that made him NASCAR’s GOAT and one of the best wheelmen the world has ever seen will – with time – propel him up a mountain few, if any, other drivers would even consider attempting to climb.

And while he does just that, we all get the pleasure of continuing to witness a level of greatness that will be talked about for generations on full display.