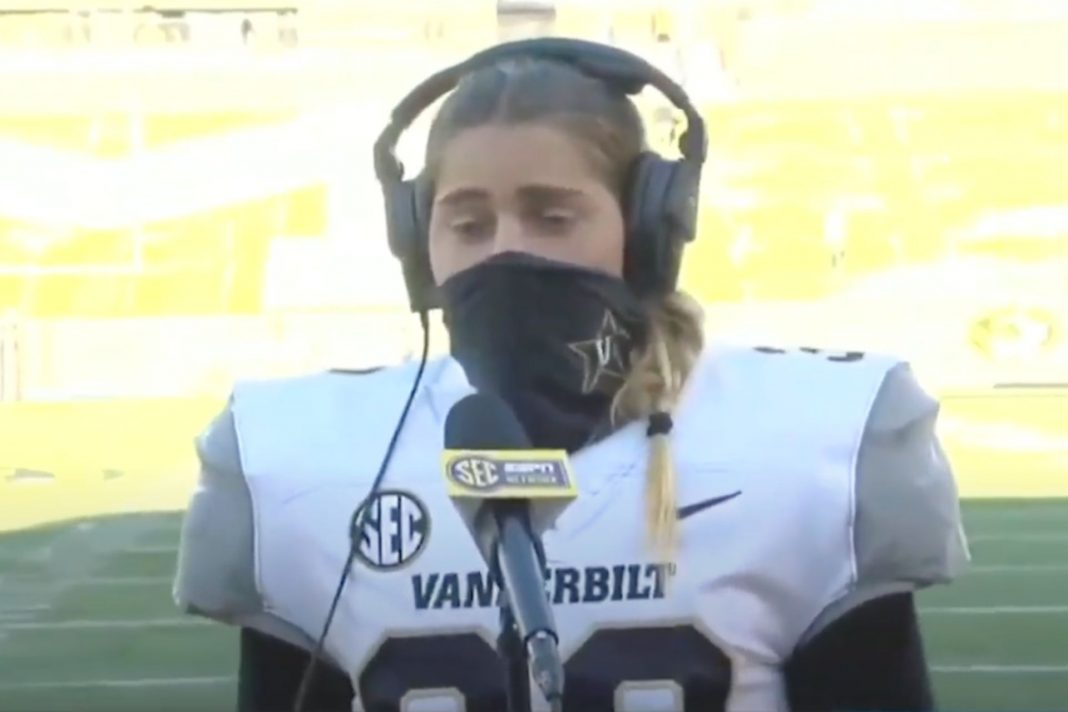 Football in 2020 is like nothing fans have ever seen before.

Players are ruled out and games are canceled on just a moment’s notice.

And now this coach played a girl during a major football game. You won’t believe what happened next.

On Saturday, Vanderbilt coach Derek Mason suited up women’s soccer team player Sarah Fuller as his kicker for the Commodores games against the Missouri Tigers.

Vanderbilt’s other kickers were ruled out due to COVID and Fuller became the first woman to play during a major college football game.

It was clear from the start Fuller had no business being on the field.

The coaches didn’t feel comfortable using her on anything longer than a 30 yard field goal and the only time she took the field was the kickoff for the second half – Vanderbilt lost 41-0 – and she kicked a miserable squib kick for 25 or 30 yards and quickly jogged off the field to avoid any contact.

Of course, the “woke” sports media loved it.

But it was after the game that this publicity stunt fiasco blew up in Mason’s face.

Fuller revealed that the coaches actually allowed an emergency use player who had been with the team for a handful of days to lecture the other players at halftime about their lack of effort and enthusiasm.

“If I’m going to be honest, I was a little pissed off at how quiet everybody was on the sideline. […] We made a first down, and I was the only one cheering and I was like – what the heck? What’s going on? And I tried to get them pumped up, and I was like, ‘You guys need to start [cheering] your team on.’

“My main thing was during the SEC tournament, my entire team was cheering the entire time. It didn’t matter if we were in the locker room or if they were on the sidelines, I think that’s what won it for us. Everybody was cheering non-stop. I just went in there, and I said exactly what I was thinking. I was like, ‘We need to be cheering each other on. This is how you win games. This is how you get better by calling each other out for stuff, and I’m going to call you guys out.’

“We need to be supporting one another. If we get a first down, if an interception happens, it’s our fault. We need to be lifting each other up. That’s what a team’s about. I think this team has struggled, and that’s been part of it. We really just need to build that team camaraderie where they can all lean on one another. It was an adjustment going from that team mentality where – hey, we’re all here supporting one another, and I just wanted to bring that to this team,” Fuller recounted of her halftime “pep talk.”

If it wasn’t already clear, this was a publicity stunt – Vanderbilt could have organized tryouts and given the job to Fuller on merit – it was blindingly obvious now.

Vanderbilt promptly fired Mason – whose 2020 record of 0-8 dropped his career mark to 27 and 55 over six seasons – the very next day.