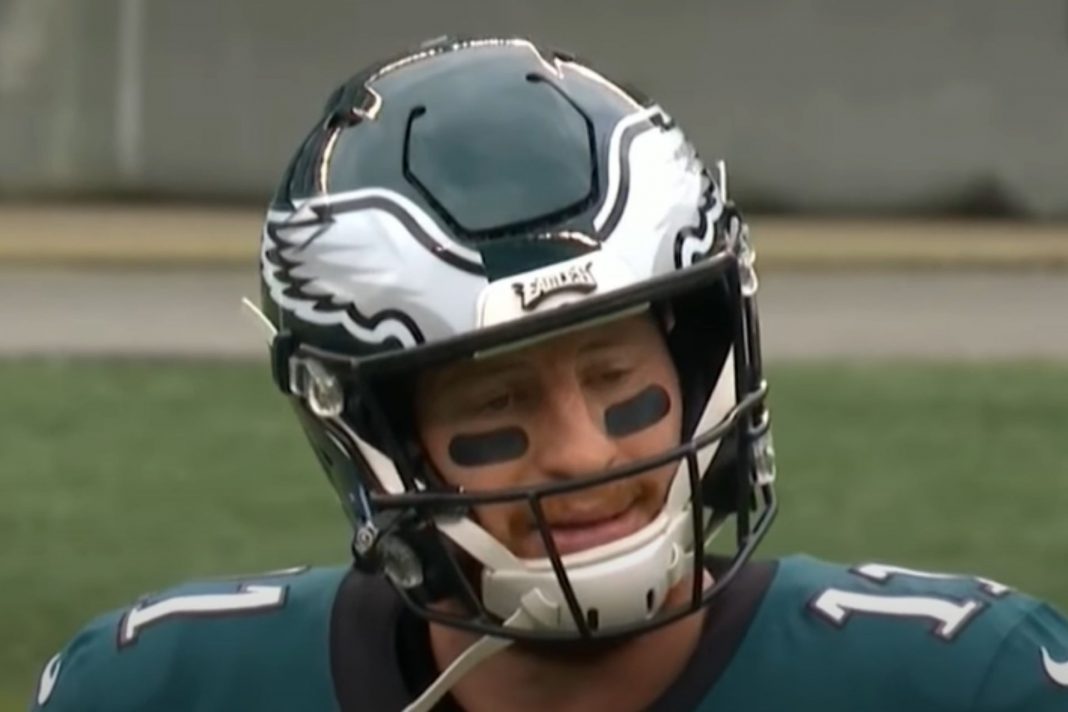 One of the biggest issues in professional sports that few people talk about is how out of control some player contracts have become.

Teams in most major sports leagues are finding more and more that these guaranteed contracts aren’t such a great idea when a player suddenly stops performing at a high level.

That’s the exact situation the Eagles find themselves in with Carson Wentz and one ESPN “insider” actually suggested Carson Wentz should pay the Eagles an outrageous sum to trade him.

It’s no secret that Carson Wentz’ level of play fell off a cliff this season.

The once promising first overall pick struggled to the point where the Eagles were forced to replace him with rookie Jalen Hurts, who has played well enough to earn a shot at keeping the starting job permanently.

Now the Eagles find themselves in a precarious position.

Just last season, they chose to sign Wentz to a four-year extension worth $120 MILLION with $70 MILLION guaranteed.

Obviously, that’s a hefty price to pay for a guy who is now a backup quarterback, and attempts to trade him will be futile thanks to the price tag involved.

On the other hand, Wentz is also a bit stuck at this point.

There’s no doubt he would also benefit from a fresh start with a new team, but he’s also at the mercy of the Eagles front office who want to be able to get something in return for him in a trade.

Despite the sticky situation, ESPN “Insider” Mike Tannebaum believes he has the best solution for best parties – Wentz should just give the Eagles back $20 MILLION that they’ve paid him so that they will trade him.

How Carson Wentz & The Eagles Can Both Win, as discussed on @GetUpESPN with @Espngreeny and @BartScott57 pic.twitter.com/dPYGmINMVb

Carson Wentz has to know his days in Philadelphia are over, but to suggest that he should pay the Eagles to do it is ludicrous.

Tannebaum’s idea is certainly a creative one that he believes will help both sides without Carson Wentz ever really losing any money, but it’s dependent on a lot of dominos falling exactly right for Wentz.

In this scenario, Wentz is taking all the risk by just handing the Eagles $20 MILLION and hoping and praying the rest falls into place, while the Eagles are far better off no matter what happens after they receive the money.

At the end of the day, the Eagles made the decision last season to resign Wentz to a massive deal with a boat load of guaranteed money despite the fact that he had really only had one good season and had multiple injuries.

Carson Wentz shouldn’t be punished for the Eagles business decisions.

Nothing is promised for players in the NFL, especially quarterbacks, and forking over $20 MILLION that he may never see again isn’t the smartest financial move for a 28-year-old who’s had injury issues already.

This is a problem only the Eagles front office can and should be held responsible for.

Carson Wentz just needs to wait patiently, prepare for when his next opportunity comes, and continue to collect those checks.