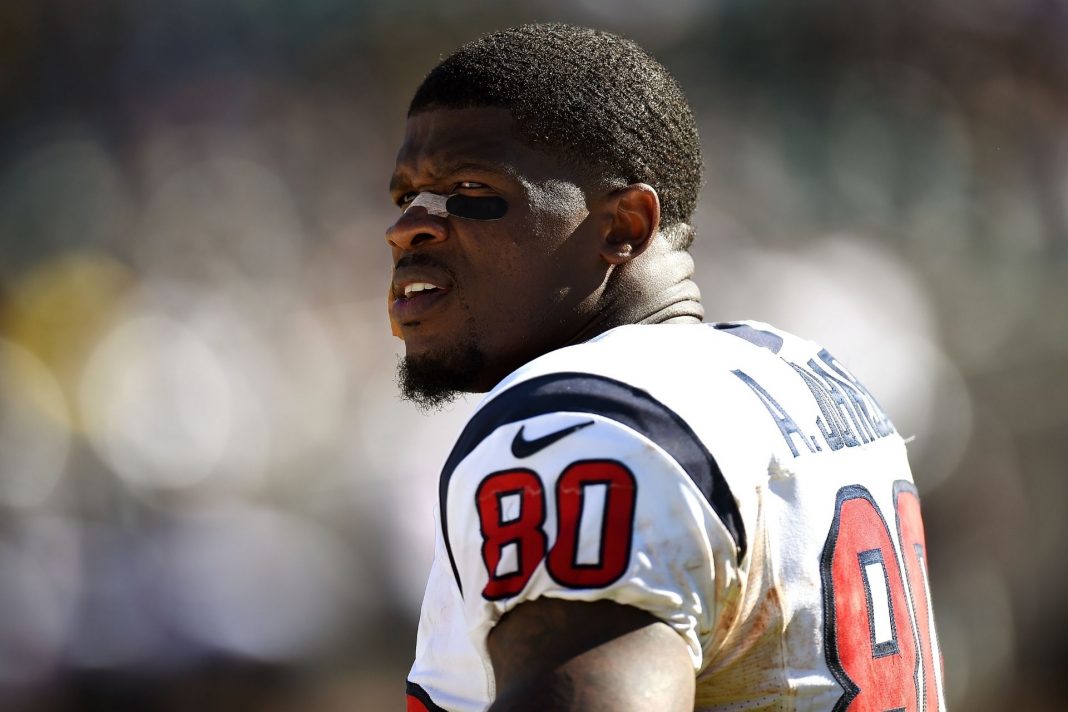 As we all know, throughout the years, countless professional athletes have allowed their oversized egos to get the best of them as they’ve said whatever comes to their mind at all times.

But when a player that usually only speaks out when it’s absolutely necessary has something to say, everyone takes note.

That’s exactly the case right now with one of the best players in Houston Texans history, who has taken to Twitter to put the franchise on blast.

Andre Johnson is arguably the best football player the Texans have ever had, as the former third overall pick racked up almost 5,000 more receiving yards than any other player in franchise history.

In his 12 years with the team, the Texans were only able to achieve a winning record just four times, yet Johnson wasn’t the stereotypical “diva” wide receiver, and was known for rarely complaining publicly about anything.

Considering those facts, it’s easy to see why Johnson’s latest comments on Twitter about the Texans and their apparent tension with quarterback Deshaun Watson have caused a major stir.

Over the past few weeks, reports have surfaced indicating that Watson isn’t happy at all with the Texans front office.

According to reports, Watson is unhappy because Texans owner Bob McNair promised Watson that he would be involved in the process of hiring a new general manager and head coach so that the quarterback could provide feedback, but failed to do so.

#Texans QB Deshaun Watson is extremely unhappy with the organization after owner Cal McNair informed him he would be involved in the GM and coach hiring process and provide feedback… but then did neither in the hire of GM Nick Caserio, sources say.

For some, this might not seem like a major issue, but Deshaun Watson is the best quarterback the team has ever had, and is a player the Texans have said they want to build around long term.

So going back on a promise to get his feedback on the hiring processes of two major hires that directly impact Watson’s career – and health for that matter considering how bad the Texans offensive line has been – it’s not unreasonable for Watson to express concern.

This whole situation has led to a full week of reports and speculation on how this situation will play out.

And Andre Johnson took to Twitter to give his two cents, offer some advice to Deshaun Watson, and absolutely destroyed the Texans’ organization in the process.

If I’m @deshaunwatson I will stand my ground. The Texans organization is known for wasting players careers. Since Jack Easterby has walk into the building nothing good has happened in/for the organization and for some reason someone can’t seem to see what’s going on. Pathetic!!!

Having someone who is arguably the best player in franchise history openly state that the Texans are known for “wasting players careers” has to be the ultimate knockout punch to a franchise that has never been able to really put things together.

It’s also hard to argue with Johnson’s logic, considering how inept the team was throughout his career, and how they’ve continued to be stuck in mediocrity throughout future Hall of Famer J.J. Watt’s career as well.

To make matters even worse for the team, another Texans great, DeAndre Hopkins, who was traded by the team earlier this year, seemed to concur with Johnson’s statement.

While this is obviously a public relations nightmare for the Texans, this whole ordeal could have even further implications.

It’s no secret that players around the league talk to one another about the team’s they play for, but having two of the best players in franchise history absolutely trash the organization publicly for wasting players’ careers will not exactly inspire other great players to head to Houston.

And all of this comes on the heels of a season in which J.J. Watt ripped his teammates for not giving the effort professional, millionaire athletes should, as the team sunk to 4-12.

Needless to say, things could be a whole lot better for the Houston Texans right about now.

But, if we’re being honest, it’s pretty clear they’ve brought this all on themselves.