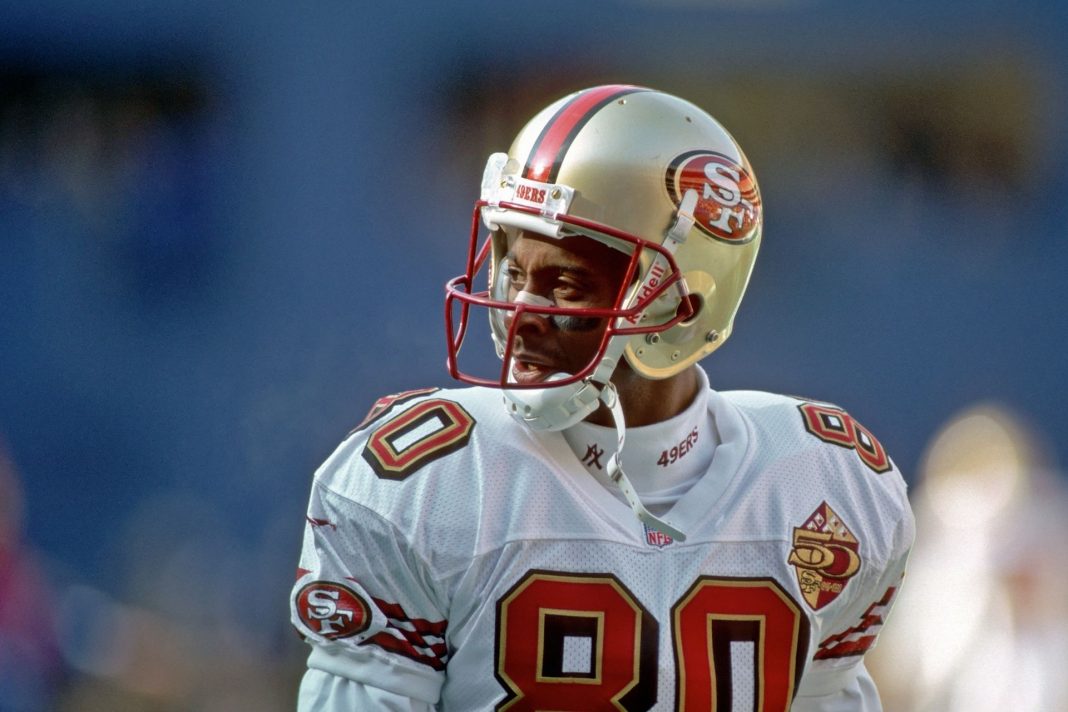 There’s no denying that the game of football has changed, giving the offense a distinct advantage in recent years.

That fact has certainly helped bolster some players’ careers, and left fans and former players alike debating how past stars would perform under today’s rules.

As for one of the greatest football players of all-time, he’s convinced his record setting stats would be double in today’s NFL.

Throughout its history, the NFL has seen many great players come and go, but only a handful stand out as worthy of being in the conversation for greatest of all-time.

One of those players who stands head and shoulders above the rest is Jerry Rice.

On top of three Super Bowls, a Super Bowl MVP, multiple Offensive Player of the Year Awards, 10 All-Pro selections, and 13 Pro Bowls, Rice holds the NFL record for career receptions, receiving touchdowns, and receiving yards, as well as the record for most points scored by a non-kicker in league history.

And most of those records aren’t even close, as Rice has over 5,000 more receiving yards, more than 100 more receptions, over 40 more receiving touchdowns, and over 200 more points scored than any other player in NFL history.

Put simply, unlike virtually every other debate over the greatest player at each position, the debate over Jerry Rice being the league’s greatest receiver of all-time isn’t even close.

It’s why Rice is basically the only non-quarterback in the league’s history that has a legitimate argument for being crowned the greatest pure football player of all-time.

But despite all of the success Rice had in the 1980’s and 1990’s, he recently claimed that he would have doubled all of his stats if he were able to play in today’s NFL.

According to Rice, some of the rules changes the NFL has made in recent years have greatly benefited the offense – specifically wide receivers – and he believes he would have thrived under those circumstances.

“First of all, the game really favors the wide receiver now, because you can’t put your hands on him,” Rice said. “Linebackers can’t take shots at you coming across the middle anymore. It’s kind of hard because it’s hypothetical, I probably might be able to, like, double everything.”

Whether or not Rice’s estimation that he would have been able to double his production in today’s game is accurate or not, there’s no doubt he’s correct that the game is much easier for today’s receivers than it was in Rice’s heyday.

The physicality that was required of receivers in Rice’s prime is all but gone, and they’re now basically given free rein to streak up and down the field, as the league-wide increase in points scored in recent years has proven.

So, while the argument over whether or not he could double his production is obviously a totally hypothetical debate that will never be proven one way or another, Rice’s primary point — that today’s game is easier for receivers than it was in his day — is absolutely correct.

Of course, that’s a fact that probably won’t sit well with today’s diva wide receivers, but they’ll just have to get over it.