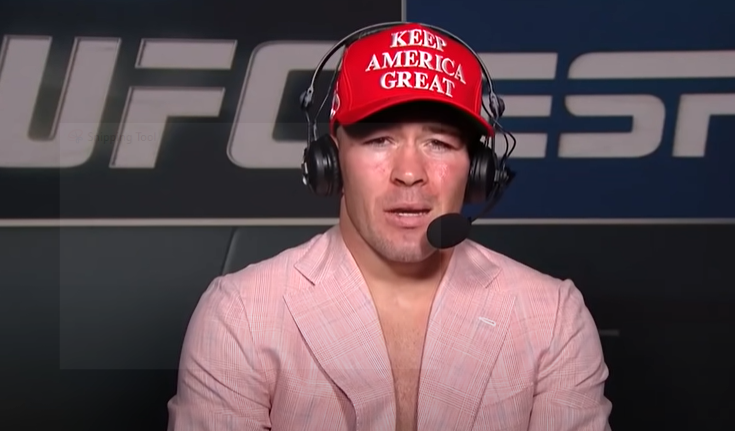 LeBron James is the leader of the new generation of “woke” political athletes.

But not everyone appreciates his Trump hatred.

And this one UFC fighter had a message for LeBron James that put jaws on the ground.

UFC welterweight champion Colby Covington is a diehard Trump supporter and has previously criticized LeBron James and other left-wing athletes as “spineless cowards” for their anti-Trump and anti-police protests.

James responded by claiming a combat sports champion would be afraid to face him.

Covington – who is known as one of the more outlandish personalities in the UFC – responded during a promotion for a UFC-affiliated website mybookie.com.

Standing on a beach between two women, Covington sarcastically congratulated James on winning a title in the least watched NBA finals in history and also noted that UFC’s viewership was up because UFC did not turn their sport into a shrine for Black Lives Matter.

“Congratulations are in order for my good buddy, LeBron James. Congrats, LeBron. Congrats on setting the record for the least-watched NBA Finals in history. You wish you could blame it on the pandemic, but everybody’s just sick of your woke b——t. And while the NBA ratings are down, UFC is up, just like our bank account,” Covington stated.

Many sports media observers speculated about why the finals drew such pitiful viewership, but the NBA is not guessing.

League commissioner Adam Silver revealed that next season the NBA will no longer paint Black the Lives Matter on the court and players will go back to wearing their names as opposed to left-wing social justice messages on their jerseys.

Whatever happens in this election, it’s clear that in the feud between Colby Covington and LeBron James, Covington scored a knockout.