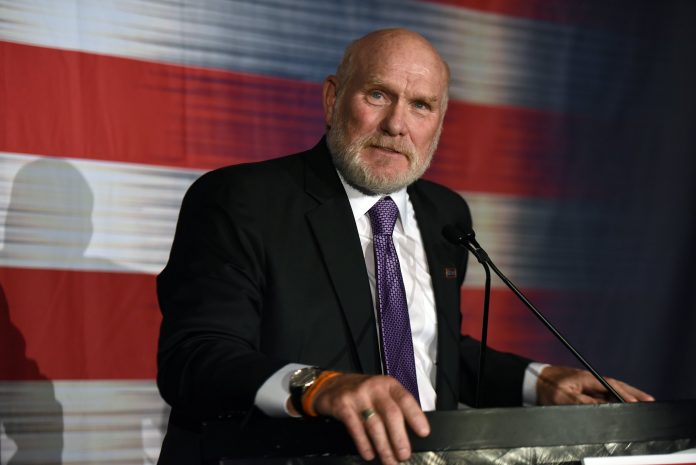 There’s no denying the New England Patriot’s incredible run in the Brady-Belichick era, including six Super Bowl championships out of nine Super Bowl appearances between 2001 and 2018.

But not everyone is ready to crown Tom Brady the “Greatest of All Time.”

And let’s face it, it’s not even worth mentioning how many divisional titles the Patriots won during that time with the AFC East being comprised of the Buffalo Bills, New York Jets, and Miami Dolphins.

They were basically starting each season with a virtually guaranteed six wins from divisional play alone. It’s a far cry from the hard-nosed, gridiron football found in the AFC North rivalries.

In a recent interview, Hall of Fame quarterback Terry Bradshaw told 97.3 the Fan in Pittsburgh there were a number of quarterbacks he thought were more talented than Tom Brady.

“Does he have more Super Bowls than anybody? Yes. Therefore, he’s the best. I absolutely have no problem saying it. If you’ve got the most Super Bowls, you can be in there, but I don’t put anybody as the greatest of all time. … Is he better than Montana? Not in my opinion. Is he better than Drew Brees? Yeah, maybe.

“I’m just not blown away by all of this,” Bradshaw concluded.

At the same time, the quarterbacks Bradshaw named were undeniably some of the greatest to ever play the game and as such deserve a deeper look.

Two-time Super Bowl champion Roger Staubach is often referred to as the quintessential Cowboy legend. Earning his nickname in the 1972 playoffs against the San Francisco 49ers, that was just one of twenty-three Fourth Quarter comebacks, including giving rise to the famed “Hail Mary” pass against the Minnesota Vikings.

Fifteen year starter for the San Diego Chargers, Dan Fouts and Head Coach Don “Air Coryell” practically invented the modern NFL offense, including throwing for over 4,000 yards in three consecutive seasons from 1979-81 when everyone else was still playing the ground game. The 1981 Divisional Playoff Game against Don Schula’s Dolphins – the “Epic in Miami” – is still considered one of the greatest games of all time, setting long-standing records for total yards, total pass yards, and total points.

Speaking of the Dolphins, Dan Marino was considered by many the definition of what a quarterback should be. Quick on his feet with an even quicker release, Marino threw for over 5,000 yards and 48 touchdowns in the 1984 season, leading many to question what kind of numbers he would’ve put up in today’s NFL. Unfortunately for Marino and the electric Miami Dolphins offense he piloted, the lousy Miami Dolphins defense kept Marino from ever winning a Super Bowl. That’s something even Tom Brady would’ve needed a miracle to pull off . . .

Despite his tall and lanky appearance, there’s no denying Joe Montana’s elusiveness and ability to find second and third receivers in the pocket allowed him drive his team to four Super Bowl Wins. It’s one of the reasons he is the NFL’s only three-time Super Bowl MVP. Much like Staubach before him, Montana was known as “the Comeback Kid” for his numerous comeback wins, including a famous fourth quarter drive in Super Bowl XXIII when Montano drove down the field completing 8 out of 9 passes for 92 yards. He still holds Super Bowl career records for most passes without an interception (122 in four games) and the all-time highest passer rating of 127.8.

When you look at quarterbacks like these, it’s easy to see what Terry Bradshaw was getting at. How can you possibly name just one man the “G.O.A.T.”?

Who else would you place on this list? Share your favorite or tell us what greats Bradshaw left out in the comments below.