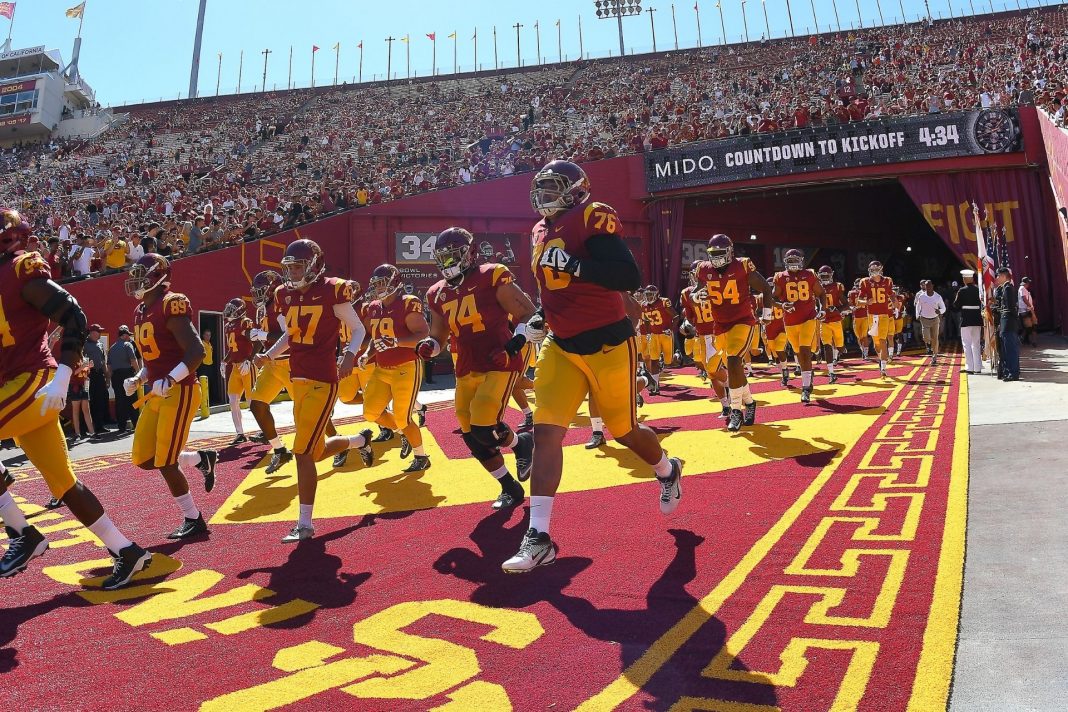 Every college football offseason, there seems to be a story that captivates the Internet.

More often than not, it’s some sort of shocking report or a more serious story, but on a few rare occasions, it’s just a fun story.

And now, the guy who somehow snuck onto the USC football team is now telling his story.

The latter was the case when a guy somehow snuck onto the USC football team last month, and now he is telling his story.

About a month ago, the Internet was abuzz with the story of a guy who pretended to be a University of Southern California football player in order to enter the team’s facility.

From the reports at the time, he just appeared to be a fan who was curious about what a player’s life is like, so once he got inside, he put on some USC gear, took a dip in the hot tub with other players, grabbed a bite to eat at the dining facility, and ended up fielding punts in practice before getting caught.

But since this wild story broke weeks ago, that’s all we’ve known about the imposter and his insane time pretending to be a USC football player.

That is until now, as 25-year-old Joshua Pryor has finally publicly outed himself as the imposter, and recently appeared on the “Momentum” podcast with former USC quarterback Mo Hasan and co-host Justice Shelton Mosley to explain how the day unfolded.

According to Pryor, he happened upon a custodian who was walking out of the facility, and apparently assuming he was just a player, she let him walk right in.

He then proceeded to spend two hours going back-and-forth between the team’s hot and cold tubs with current players who apparently never noticed he wasn’t one of their teammates.

Pryor then decided to wander around the facility for a while and stumbled upon USC head coach Clay Helton hitting golf balls on a simulator.

He admitted that he thought about going up to him in the hopes he might land a scholarship offer on the spot, but thought better of it.

Instead, Pryor went and grabbed himself a bite to eat, before heading back and realizing that the team’s locker room was wide open.

With the team out at practice, Pryor decided that now that he has the gear, he might as well head out onto the practice field and act like he was just late because of a study session that ran late.

Pryor then noticed that a punting drill was going on, and decided that he might as well go all-in and jump at the chance at some action with the team.

He fielded his first punt opportunity without an issue, but then proceeded to drop the next two, which apparently sent up red flags to the coaches who finally realized he wasn’t supposed to be there.

Most hilarious of all is the fact that the number 87 jersey Pryor was wearing actually belonged to Hasan’s old roommate, who just happened to be out of practice that day.

And the rest, as they say, is history.

Joshua Pryor has become a bit of a living legend amongst the Internet, as he was able to do exactly what many fans have only dreamed of doing.

He was just a guy who happened to see a chance to have a little fun, and he went for it.

You can’t fault a guy for basically just going with the flow and somehow finding himself fielding punts with the USC football team.

It’s obviously something almost any young football fan would do if they could.

Plus, it’s just an incredible story he’s now going to be able to tell for the next 50 years or so.

It really doesn’t get much better than that.