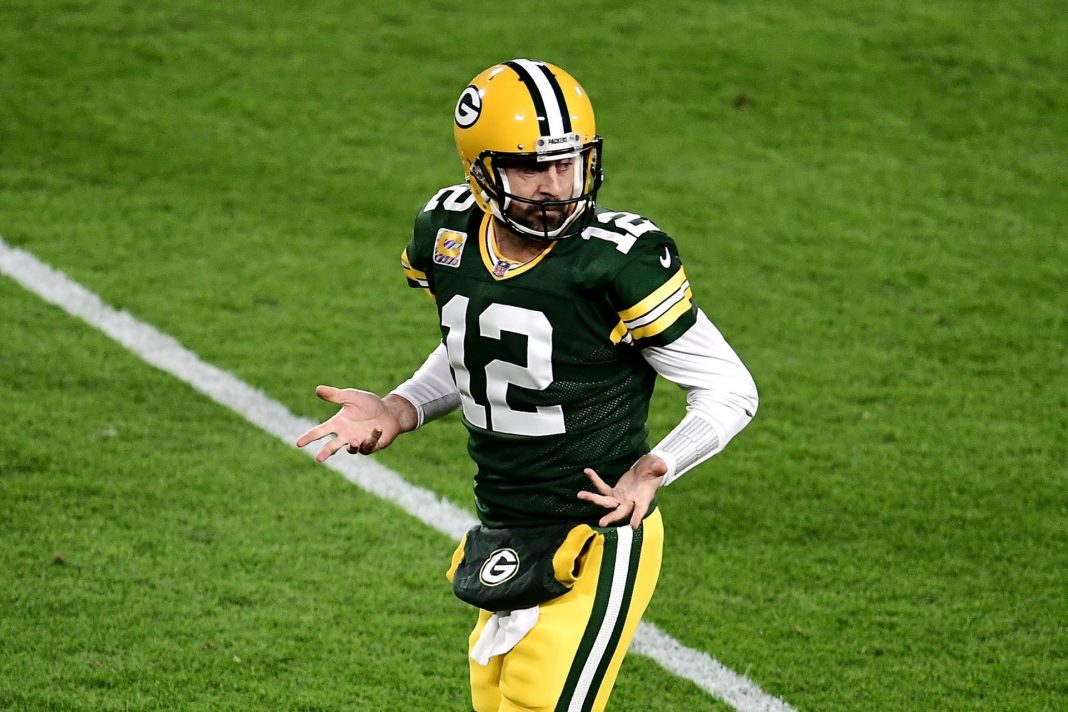 The Aaron Rodgers saga has undoubtedly been the story of this NFL offseason.

For several months, Rodgers and the Packers have been locked in a standoff, and while neither side looks great, Green Bay has definitely been losing the PR battle.

But now, the Packers are so desperate to save face that they’ve resorted to making up obvious lies about one of their franchise’s greatest players.

Since it was first reported that Aaron Rodgers wanted out of Green Bay, he’s made it very clear that his issue is with the team’s front office and its rather clear disregard for the players who make everything on the field happen.

After leading the Packers to a Super Bowl in 2010 — more than a decade ago — all Rodgers has wanted is for the front office to put the pieces in place to give him another chance to carry them to the promised land.

He’s been patient, hasn’t had anything negative to say in the media, and has simply carried the team on his back, only to have their lack of quality depth bite them in the rear year after year.

And even though they won’t spend to improve the team around him, they’ve also refused to reward Rodgers with a new contract after they drafted a rookie quarterback in the first round of the 2020 draft, and Rodgers followed that up by being the best quarterback in football last year.

For most rational fans, that makes total sense, and has prevented many from possibly turning on Rodgers for holding out, as NFL fans have been known to do with other players in the past.

Well, the reality that Aaron Rodgers isn’t just going to cave and most fans are on his side has apparently begun to sink in up in Green Bay, so they have resorted to spewing what appears to be lies about Aaron Rodgers in an effort to save face and make him look like the bad guy.

Green Bay President Mark Murphy took to the team’s official website earlier this week to claim that Aaron Rodgers is “dividing” the team’s fan base.

His proof? Emails and letters he claims he received from supposed fans.

“The situation we face with Aaron Rodgers has divided our fan base,” Murphy wrote. “The emails and letters that I’ve received reflect this fact.”

He also claimed that the less both sides say publicly the better, which is rather hilarious considering he had just claimed Aaron Rodgers is dividing the team’s fan base in basically the same breath.

“As I wrote here last month, we remain committed to resolving things with Aaron and want him to be our quarterback in 2021 and beyond,” Murphy claimed. “We are working to resolve the situation and realize that the less both sides say publicly, the better.”

The whole idea that Murphy’s proof that the fan base is divided is based on letters and emails he claims to have received seems a little suspect.

Sure, there are definitely Green Bay fans who believe “the team is bigger than one player,” and those are the same fans who wanted to boot Brett Favre out of town.

There are always going to be those people who so arrogantly believe that Green Bay has been good since the ‘90s because they’re some superior franchise, and not because they’ve been fortunate enough to have two Hall of Fame quarterbacks back-to-back in a period of NFL history in which the quarterback position is the single most important position in all of sports.

But there is still no doubt that the majority of fans fully understand that without Aaron Rodgers, there’s basically a 0.0% chance the Packers are a playoff team, as the 2017 season proved when Rodgers broke his collarbone.

Furthermore, to claim that both sides shouldn’t speak publicly about the situation while you’re basically trying to turn public opinion against Rodgers is a wild move.

It just proves that Green Bay knows they have messed this entire situation up.

They’ve kicked the can down the road for over a decade, and have taken yet another Hall of Fame quarterback for granted.

Now, it’s coming back to haunt them.

No matter how hard they try, unless they miraculously change Rodgers’ mind, they’re facing a disastrous situation that could see them become a mediocre or worse team for years to come.

That might not be what most Packers fans deserve, but it’s certainly what their front office deserves.