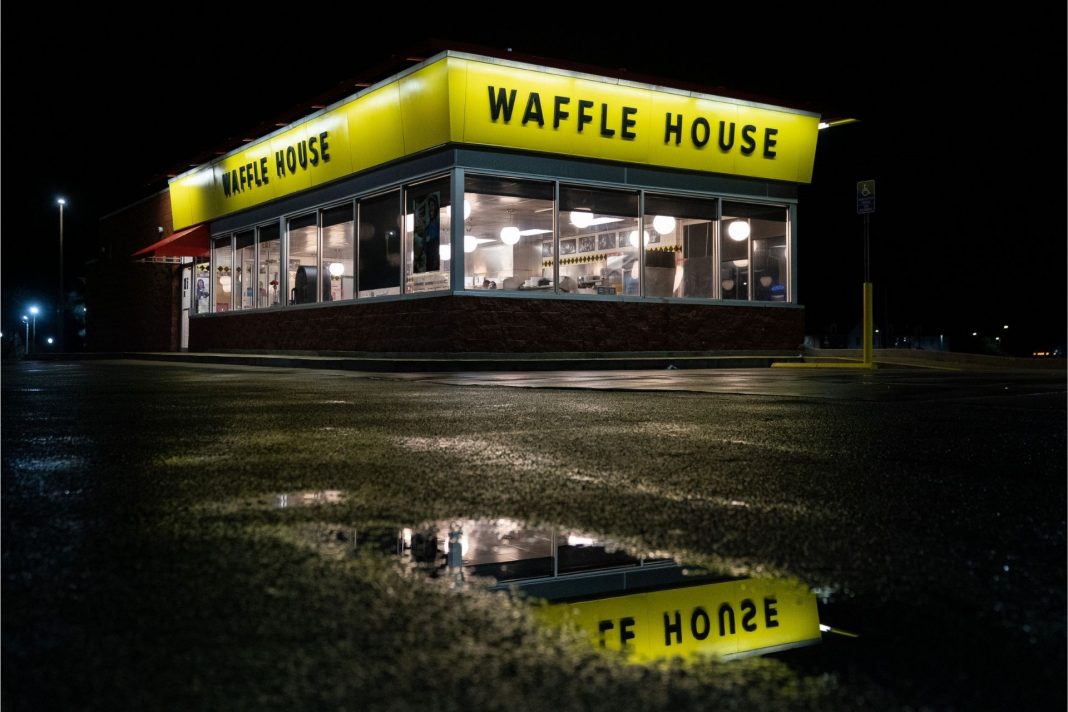 There are leagues around the world filled with players all fighting for a mythical championship that only exists in their mind.

And so they don’t finish last and face a punishment like this fantasy football loser’s Waffle House punishment that somehow seems both very miserable and very awesome.

Winning a fantasy football championship and having bragging rights over the friends or co-workers you play against is a good feeling.

But an even better feeling is when you get to watch your loser friend suffer through their last place punishment.

For one fantasy football loser in Mississippi, though, it wasn’t just his friends watching him go through his punishment – it was basically the entire world.

After finishing in last place in his fantasy football league, Lee Sanderlin’s friends sentenced him to spend 24 hours inside a Waffle House.

He couldn’t leave the premises, but was allowed to shave one hour of time off for every waffle that he consumed while he was there.

And best of all, he Tweeted the entire experience so the world could also enjoy his misery.

I am coming to you live from a Brandon, Mississippi Waffle House. I, a total loser, came in last place in my fantasy football league. As punishment, I spend 24 hours in a Waffle House. Every waffle I eat shaves an hour off the clock. It’s 4:07 Central. pic.twitter.com/oRugzU7rQT

Sanderlin wisely started off with two waffles immediately to go ahead and get some time out of the way, as the Waffle House staff watched on in complete disbelief that any lunatic would willingly spend 24 hours inside a Waffle House.

2 down. That means two hours down. 21.37 hours left roughly. Already my stomach is rumbling. Gonna be a long one.

Fortunately for him, there was plenty of entertainment to help him pass the time, and apparently to give him motivation to eat waffles like a champion.

He even got the pleasure of a story time from the Waffle House’s cook who told the tale of the time he was shot in the chest, which we can only imagining was the most riveting tale ever told inside a Waffle House that was being used as a makeshift asylum for a fantasy football loser.

The cook this evening is telling me about the time he got shot in the chest — and also that he really likes working here. Anyways, ordering 2 more and getting on with it

Thankfully, he was given the OK by his league commissioner to spend some of his time in the parking lot getting some fresh air, and was even given the go ahead to – well – vomit, if necessary.

Admittedly, while having to sit in a Waffle House for 24 hours while putting down as many waffles as possible to try to shave off time is a vicious punishment, allowing vomiting seems like the easy way out.

Everyone knows that when you have punishment or challenges that involve eating, hot dog eating contest rules apply, and any vomiting should result in at least some sort of penalty.

Regardless, Sanderlin continued to soldier on, and by the time he got to waffle number six he for some reason decided to punish himself even more by looking back at his week eight roster, which can only be described as not great.

I found my roster from like week 8 or whatever. Just not good. Also, I am definitely puking soon pic.twitter.com/L7l2xFmUF9

Six hours in, he completed waffle number six, but it definitely came at a hefty price, as a trip to the bushes outside was required to relieve some of his intestinal distress.

As you can see from the image below, at this point Sanderlin wasn’t exactly looking too hot.

Quick little trip to the bushes outside if you know what I’m saying. Now, back into the breach pic.twitter.com/gwGvvUkeE1

After his trip to the parking lot, he tried to continue pushing through to waffle number seven, but that’s when things went completely off the rails, literally causing his body to revolt against him.

Full of waffles but devoid of life

Wisely, Sanderlin took some time in the parking lot recharging his phone and attempting to compose himself.

Once he returned to Waffle House’s friendly confines, he also made probably the best decision he could, and put down a cup of coffee to help dump a few of the demons from his body, if you know what I mean.

What’s up: back from my brief stint getting some phone juice. Got some coffee in an effort to get ~ t h i n g s ~ moving. Sorry to the haters who thought I’d spend the night sleeping pic.twitter.com/hmBR6VlL03

After over three hours of work, he finally managed to somehow get waffle number seven down his gullet, and made the call that it was time for another cup of coffee to get things moving while he sat back and took a little break from the waffles.

Enjoying another cup of coffee, trying to make some room. Beyond the utter and total discomfort I feel, Waffle House is pretty peaceful right now. Kind of zen. Not touching no. 8 for at least an hour

As the sun began to rise on what had to be the longest night of this man’s life, the music that provided him entertainment earlier in the evening came through once again, this time giving him that little bit of extra motivation he needed to get two more waffles down and power through the remaining hours.

With the finish line in sight, Sanderlin kept forging ahead, desperately trying to end his nightmare as soon as possible.

All that stands between me and going home in the next 30 minutes. So damn close. pic.twitter.com/2EgD4Dajdv

Finally, after 15 hours, nine waffles consumed, an untold number of calories, and ensuring that he’ll be dead inside for the foreseeable future, Lee Sanderlin completed his journey, and stood victorious on the shoulders of the Waffle House giants who came before him.

Some may look at this punishment and think they could easily power through, but what they fail to consider is just how soul crushing it is to scarf down five waffles only to realize that you still have 17 hours remaining in an uncomfortable booth.

Oh, and don’t forget that this is a Waffle House, after all, so you constantly have to have your head on a swivel knowing that a chair could come flying at your head at any moment because a massive brawl broke out.

That type of mental and physical challenge is only rivaled by attempting to swim across the English Channel in the middle of winter.

You have to hand it to Lee Sanderlin, he showed the type of intestinal fortitude – both literally and figuratively – that only a select few humans possess.

He also did it all while also doing his own live play-by-play and allowing the world to share in his miserably awesome experience.

There’s no doubt he went home that morning and came as close to dying as any human can without meeting his maker.

But even if he never wakes up from his food coma, he will forever be remembered by the Internet.

And, of course, that’s what truly matters.