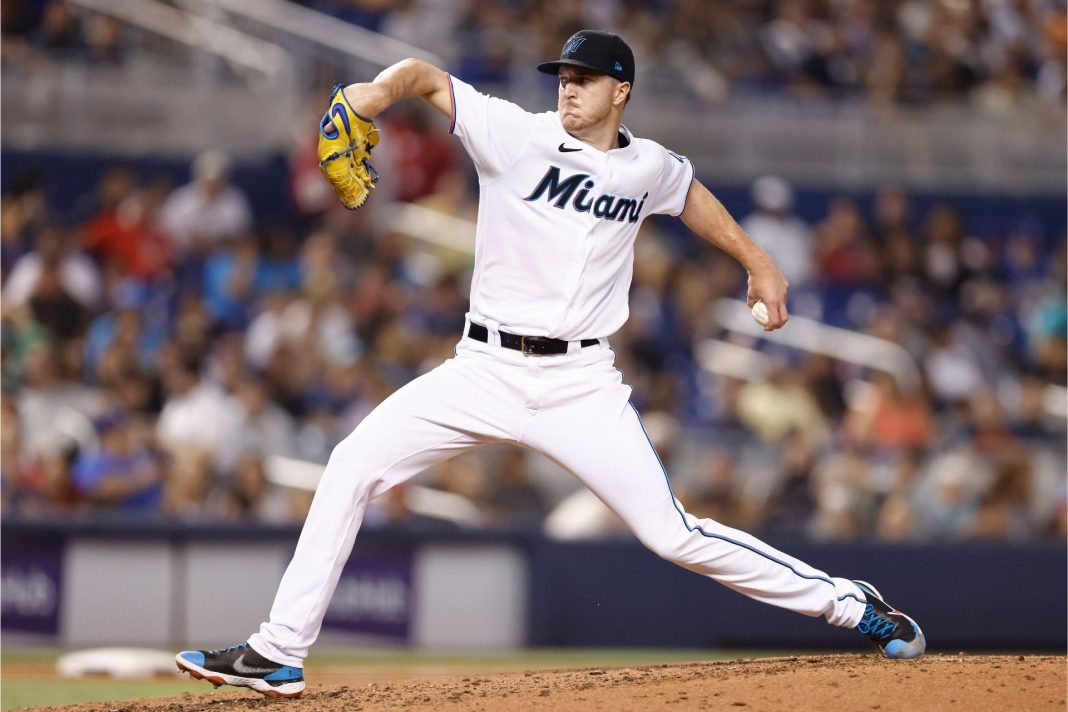 For most MLB rookies, constantly looking over your shoulder is part of life as you know you may be sent back to the minors at any time.

After all, teams routinely move players up and down their organization to deal with different roster needs.

So when this rookie walked into his manager’s office, he thought he was for sure going back to the minors . . . until this happened.

Through the first half of the 2021 season, Marlins pitcher Trevor Rogers has been as good as a rookie pitcher can be.

Through 16 total starts, the 23-year-old lefty has a 7-5 record that would only be better if he wasn’t on a horrendous team, an incredible 2.14 ERA, has recorded 15 strikeouts in his last 10 innings of work, and became the first left-handed rookie to strike out 100 batters in his first 15 starts since three-time Cy Young Award winner Clayton Kershaw in 2011.

His performance so far has catapulted him to the top of virtually everyone’s NL Rookie of the Year list, and made him one of the top young pitching prospects in baseball.

But despite all of the success, that lingering feeling that all MLB rookies have of being sent back to the minors is apparently still nagging him.

It was earlier this week when the Marlins’ manager Don Mattingly called him into his office to share some “tough news” with him.

Of course, that “tough news” was part of a prank Mattingly had concocted to have some fun with his star rookie, making Rogers believe that he was being sent down to the minors.

In a video posted by the Marlins’ official Twitter account, Mattingly convinced Rogers that the team wanted to “control (his) innings through the course of the year” and send him down to the AAA level.

Considering Rogers knew he was having a rookie season unlike any a rookie has had in years, he was pretty confused, but like all rookies, figured this may happen at some point so he went along with it rather professionally.

Mattingly then proceeded to ask if Rogers had any plans for the MLB’s All-Star break, before telling the southpaw that his plans were going to have to change – because he was selected to play in the All-Star Game in Colorado.

That one time @T_Raw1691 thought he was being optioned to @JaxShrimp.

Here’s how the All-Star found out he was headed to Colorado. #JuntosMiami pic.twitter.com/btC70oS6HF

His selection makes Rogers the only Marlins player selected for this year’s All-Star Game, so needless to say, he was pretty over the moon to find out he was named an All-Star rather than being sent back to the minors to ride a bus from mid-sized city to mid-sized city.

No matter what, you just have to love these types of videos.

Whether it’s the walk-on college athlete being granted a scholarship, veteran benchwarmers getting the chance to play valuable minutes, or rookies making All-Star teams, these surprise announcements will never get old.

In a world where sports has become so corporate and political, it’s a stark reminder that at its core, sports are still pure when they’re allowed to be.

Quite frankly, sports could use a lot more of this, and a lot less of players becoming self-proclaimed political and cultural experts.