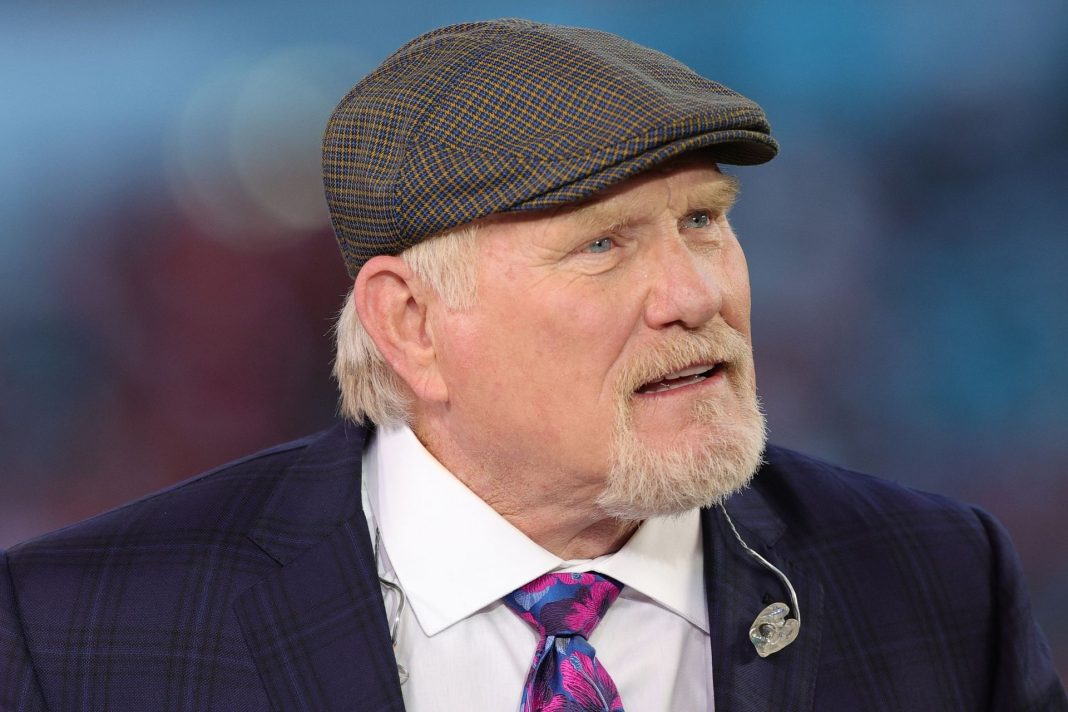 It’s essentially an unwritten rule that players rarely speak ill of one another, especially when it comes to the business side of the sport.

But this NFL legend took a different route recently, as he absolutely eviscerated Aaron Rodgers for wanting out of Green Bay.

Since the news that Aaron Rodgers had reached the point where he no longer wanted to play for the Packers broke prior to the NFL Draft last Thursday, that story has dominated sports media.

It seems as though every day there is a new report about the situation, and with that simply comes more debate and hot takes.

But no hot take on Aaron Rodgers and the Packers – or maybe even any hot take said this year – comes close to what NFL legend Terry Bradshaw had to say.

In an interview with a Boston sports radio show, Bradshaw absolutely unleashed on Rodgers, and said that the idea that he is upset that the Packers drafted a quarterback with their first round pick in 2020 is proof he’s “weak.”

“With him being that upset shows me how weak he is,” Bradshaw said. “Who the hell cares who you draft? I mean, he’s a three-time MVP in the league and he’s worried about this guy they drafted last year at No.1?”

Bradshaw did admit that he doesn’t know what the Packers may have promised or told Rodgers behind the scenes, but in his eyes, there’s still no reason for the reigning league MVP to be upset because the Steelers drafted quarterbacks when Bradshaw played in Pittsburgh and that didn’t upset him.

“Now, I don’t know what was said behind the scenes,” Bradshaw conceded. “I don’t know if he said like, ‘I’ll play this year then I want out of here’ and they said, ‘Fine.’ And then he’s the MVP of the league. I don’t know. None of us know. Unless he told some insiders and they’re saying it. I don’t hear it.”

“And for him to be upset, my God, I don’t understand that,” he reiterated. “Pittsburgh drafted Mark Malone number one, Cliff Stoudt in the 3rd or 4th round. I had them coming at me from all angles. I embraced it, because when we went to practice, I wasn’t worried about those guys. You know? They didn’t scare me a bit. So I don’t understand why he’s so upset at Green Bay.”

But what apparently really sent Bradshaw over the edge and made him come for Rodgers throat was the fact that it has been reported that Rodgers told the Packers he would only return to the team if they fired general manager Brian Gutekunst.

“And then if they fire the General Manager he’ll come back?” Bradshaw mockingly asked. “Are you kidding me? Really? Aaron, that’s where this is?”

According to Bradshaw, if he were running the Green Bay Packers right now, he knows exactly how he’d handle this situation – he’d supposedly tell Aaron Rodgers to kick rocks.

Now, let’s be real here, it’s obviously very easy for Terry Bradshaw to claim that he would let Aaron Rodgers retire when he’s saying it from his 744-acre ranch in Oklahoma while sitting in his underwear on a Zoom interview.

It’s an entirely different situation for the folks actually sitting in the Packers front office right now to let a Super Bowl winning quarterback with three MVPs to his name just walk away when your backup plan is the completely unproven second year quarterback that supposedly got you into this whole mess in the first place.

Whether those who take the hardline stance against every player who tries to improve their situation rather than just shutting up and taking it wants to admit it or not, Aaron Rodgers has very legitimate gripes with Green Bay.

There’s no denying the fact that he has almost single-handedly won more than 10 games in nine of his 13 seasons as a starter, including a Super Bowl, an incredible 15-1 season, and back-to-back 13 win seasons.

And despite always getting the team within spitting distance of another Super Bowl, the Packers have almost never done anything to improve the roster just the little bit he needs to get them back where they want to be.

It’s not that Aaron Rodgers is worried about the quarterback Green Bay drafted in the first round last year taking his job.

It’s that they could have easily selected another wide receiver, offensive lineman, tight end, or even a defensive player that would have made the team better immediately, rather than already looking for someone to replace one of the best quarterbacks of his generation.

The Packers have never been spenders in free agency either, always just trying to stick with virtually the same roster year after year that only gives Rodgers two real offensive weapons – go-to receiver Devante Adams and top-10 running back Aaron Jones.

The rest of their roster is, and has always been, mediocre at best, yet the Green Bay front office refuses to upgrade the depth chart when there are undoubtedly tons of players across the league who would love to play with a quarterback of Rodgers’ caliber.

The fact is, Terry Bradshaw is dead wrong that this situation proves Aaron Rodgers is “weak.”

The guy has toughed it out, dealing with the same junk every year for over 13 years, all the while knowing that even if he does put up MVP caliber numbers – like last year – the team is most likely going to fall short because they always only have just enough to be a good, not a great team.

At 37-years-old, Aaron Rodgers’ time is running out, and if he doesn’t get what he needs sooner rather than later, he has to live the rest of his life knowing that he was capable of more.

Terry Bradshaw doesn’t know that feeling because as good of a quarterback as he was, he always had one of the best teams in NFL history around him.

In fact, some might even argue that Terry Bradshaw is only looked at the way he is today because of all the Hall of Fame players he played with on the Steelers in the 1970’s, and that he’s probably actually overrated historically as a result.

Regardless, Terry Bradshaw is certainly entitled to his opinion, and there are plenty of professional athletes that you can call “weak.”

But when you take a step back and really examine the entire situation, not just looking at things in the media vacuum, Aaron Rodgers’ putting his foot down doesn’t seem “weak.”