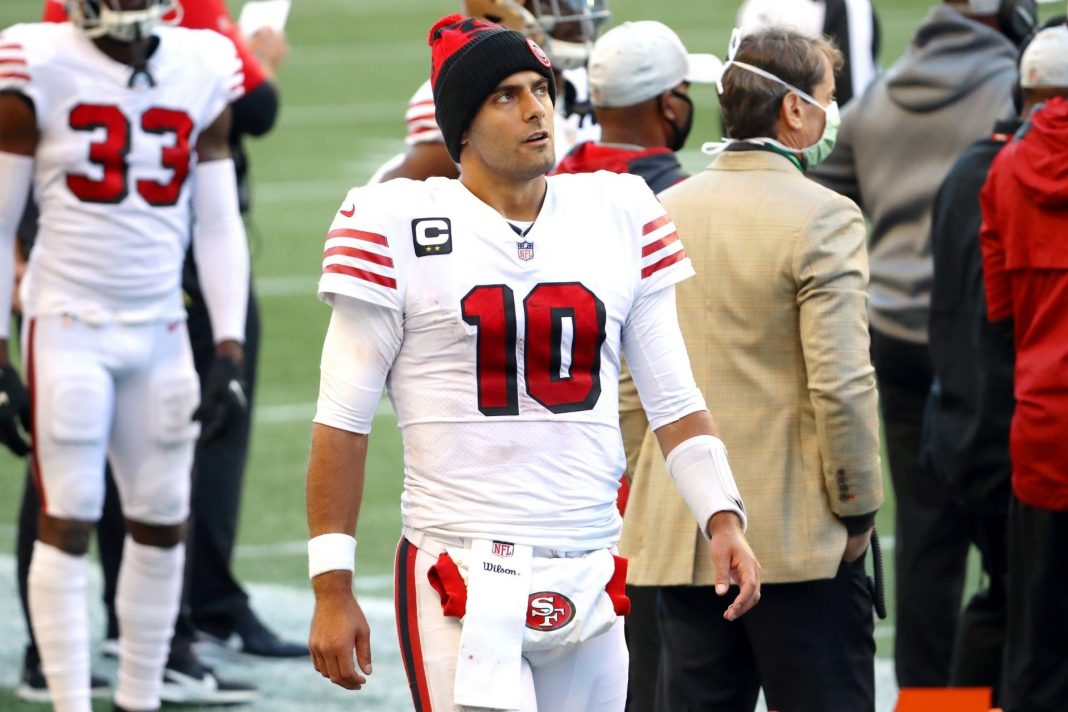 The 2021 offseason is in full swing, and with the NFL draft just over two months away, there are no signs of things slowing down.

And one of the biggest storylines of this offseason has been the potential for major changes at quarterback across the league.

On top of that, the Rams and Lions negotiated a blockbuster trade that sent Jared Goff to Detroit and Matthew Stafford to Los Angeles.

Meanwhile, across the league, teams are seemingly doing everything they can to figure out a way to land a franchise quarterback and the rumors and speculation of who will land where are going wild.

The latest headline comes out of San Francisco, where the 49ers are reportedly weighing all of the potential options available to them at quarterback.

It wasn’t long ago that the 49ers seemed to have their franchise quarterback in a deal too good to be true when they sent a second round pick to New England in exchange for Jimmy Garoppolo back in 2017.

That trade paid dividends for the 49ers as Garoppolo led the team to the Super Bowl in 2019.

But since then, the 49ers have apparently fallen out of love with their quarterback, and are now potentially looking to move on from Garoppolo.

In the past, the idea that San Francisco could trade the quarterback have been shot down because of the no-trade clause in Garoppolo’s contract, but now reports indicate that won’t be a roadblock because he is ready for a change of scenery.

“Yes, Jimmy Garoppolo has a no-trade clause. He is also due $25.5 million in salary and bonuses”, Matt Maiocco of NBC Sports Bay Area wrote. “I believe he’ll be the 49ers’ starter this season. BUT . . . if there were a trade possibility, he would almost certainly waive the clause. Otherwise, he would not get that kind of money.”

If recent reports are true, the 49ers are interested in disgruntled Houston Texans quarterback Deshaun Watson, who is almost certainly going to be traded eventually, and New York Jets project Sam Darnold.

However, while San Francisco doesn’t seem to be committed to Garoppolo, there’s also an indication that they’re not overly committed to trading him either.

“The Niners will likely only trade Garoppolo if they can land one specific quarterback,” Steve DelVecchio of Larry Brown Sports said recently. “Otherwise, they probably believe Jimmy G. gives them their best chance of contending next season.”

Of course, the 49ers aren’t the only team that seems to be looking at possibly making a move at quarterback either.

Over the past few weeks, the idea that the Carolina Panthers are looking to make a major push to replace their current quarterback, Teddy Bridgewater, with a higher caliber signal caller.

In fact, this entire offseason the Panthers brass have made comments about their lack of faith in Bridgewater, and even reportedly tried to land one of the quarterbacks who has already landed with a new team.

“Both team owner David Tepper and coach Matt Rhule have been throwing shade at their starter in their offseason comments,” USA Today noted. “The Panthers were also reported to have tried to send Teddy to the Lions in the Matthew Stafford trade that fell through.”

And clearly, all of those factors haven’t set well with Bridgewater, who has now unfollowed the Panthers on Instagram, according to USA Today.

As of now, there’s no clear indication of what the Panthers or 49ers will do with their quarterback situation, but it’s obvious both are very interested in making a change if the right situation presents itself.

Needless to say, the quarterback carousel has only just begun, and there’s little doubt that more quarterbacks will be on the move very soon.

But where they’ll end up is anyone’s guess.