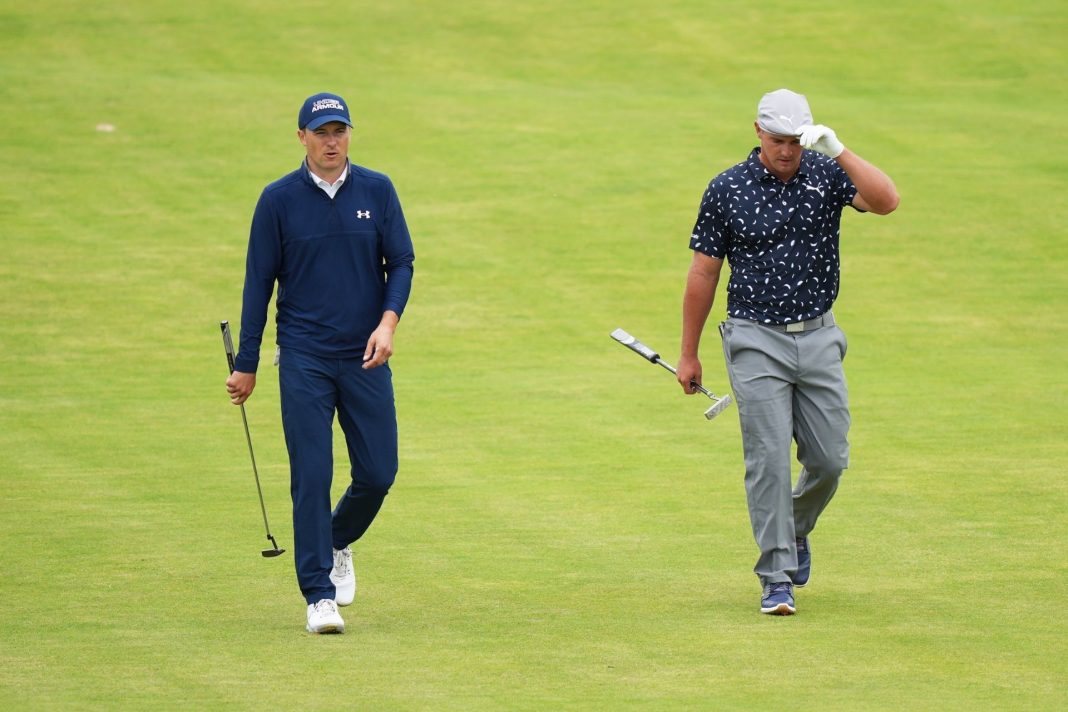 If there’s one thing golf has desperately needed for more than 20 years, it’s a storyline that could help carry the sport without Tiger Woods.

Fortunately, that storyline has emerged in the form of a hilariously awesome rivalry between two young, up-and-coming stars.

The only problem is one half of that rivalry can’t seem to stop proving he’s a total fraud and complete loser.

Obviously, golf’s TV ratings and overall popularity takes a hit any time Tiger Woods isn’t healthy and in the mix for a win.

That’s just a fact of life for a sport that really only appeals to a specific demographic unless one of the four Majors or the Ryder Cup is being played.

But recently, a new rivalry has been dropped into golf’s lap that has captivated sports fans everywhere, and created a buzz around the sport that doesn’t involve Tiger for the first time in a quarter of a century.

To put it as simply as we possibly can, Brooks Koepka and Bryson DeChambeau are two of the top young players in golf, and they absolutely hate one another.

There hasn’t been much revealed on why those two don’t like one another, but with videos like this popping up online every few weeks, it’s clear that the rivalry’s intensity only grows.

For his part, Koepka has played the rivalry perfectly, not taking himself or the feud too seriously, and just having some fun with the entire situation, like when he teamed up with Michelob Ultra to send fans free beer if they were one of the people DeChambeau had security remove from a recent tournament for calling him Koepka’s name.

However, DeChambeau hasn’t exactly played the entire rivalry the best, as evidenced by the fact that he’s so thin skinned that he can’t handle a few hecklers calling him “Brooksie.”

And despite the backlash he’s received for being so uptight and mentally weak as to not being able to handle the added attention, DeChambeau just continued to prove he’s a fraud and a loser.

First, prior to this weekend’s British Open, DeChambeau claimed that he’s “just here to play golf,” and would be totally fine with continuing the rivalry and bantering back-and-forth so long as it’s “respectful” and doesn’t cross any lines.

Of course, that entire line of thinking is rather discredited when DeChambeau is having paying ticket holders kicked out of tournaments for engaging in such banter.

It’s fraudulent of DeChambeau to try to pretend he’s into the rivalry and enjoys the banter, when all of his actions seem to prove he’s actually super hurt by it.

He also didn’t stop there, and later claimed that he thought it would be “funny” if he and Koepka were paired together for Team USA for the Ryder Cup in September.

When asked what he thought about a potential pairing, DeChambeau claimed, “No, no, no, not at all. I think it would be kind of funny. I’d love it. I think we’d do well.”

Bryson DeChambeau has said it would be "funny" to be partnered with Brooks Koepka at the Ryder Cup despite the pair's ongoing feud.

But once again, DeChambeau’s words and his actions just don’t match, and the more he talks the more he is completely exposed.

It was just a few weeks ago when the USGA attempted to pair Koepka and DeChambeau together for the first round of the U.S. Open.

However, according to reports, DeChambeau shut that down rather quickly, and absolutely refused to play with Koepka, even threatening to withdraw from the tournament if they were paired together.

“I found out last night that the USGA actually did call Bryson DeChambeau and his agent to ask if they would be okay with that and Bryson declined,” pro golfer Brad Faxon told Sirius XM Radio ahead of the U.S. Open in June.

Clearly, DeChambeau can’t stop pulling the total loser move of saying one thing while doing another.

This entire ordeal would be much easier on DeChambeau if he would embrace the rivalry as Koepka has, and just had some fun with it.

But he obviously can’t stop himself from walking around like he has a stick up his butt.