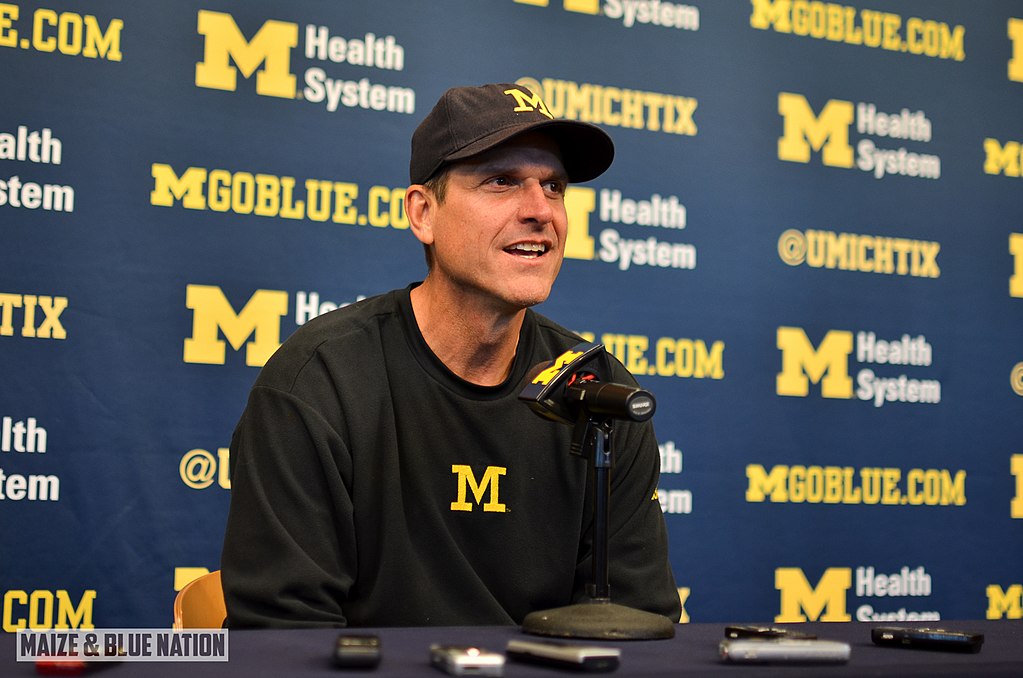 It takes special kind of gutsy football coach to take a team to the Super Bowl with Colin Kaepernick as your quarterback.

That’s exactly what Jim Harbaugh did as head coach of the San Francisco 49ers in 2013 – narrowly losing to the Baltimore Ravens 34-31 – while managing to make his also-ran quarterback look to some like he belonged in the NFL.

Now, as the University of Michigan Wolverines’ head coach, Jim Harbaugh is in hot water for this comment, which is driving liberals crazy.

Of course, Jim Harbaugh has never been shy about his views.

In the past, he’s found himself in hot water for criticizing his former quarterback, Colin Kaepernick, for refusing to stand for the national anthem and for stating he liked President Trump for “not being afraid to fight the establishment.”

He’s also lamented football elites’ ongoing weakening of the game by fixating on player safety over quality football and even called football the “last bastion of hope for toughness in America, in men, in males.”

For that, he’s earned derision by sports intelligentsia like HBO’s Bryant Gumbel, who sneered that Harbaugh’s view of football was “not exactly a quote for the Age of Enlightenment.”

You see, the modern sports intelligentsia thinks that a belief in toughness, masculinity, teamwork, competition, and sportsmanship are “outdated.”

Modern sports should be about excuse-making, “safe” play, participation trophies, and woke politics.

That’s why nothing has gotten Coach Harbaugh in more trouble than his recent comments in an interview with National Review senior editor Jay Nordlinger.

Touching on the COVID-19 panic that’s sweeping America, Harbaugh – a Roman Catholic – stated some positives of the crisis are that, “taking more of a view of sanctity of life,” before going on to state that this view conflicts with the fact that America society “aborts babies. I mean there can’t be anything more horrendous.”

For that, he’s being roundly attacked in liberal circles and the brouhaha is only growing bigger – with many liberals pointing to Coach Harbaugh’s 0-5 record versus Ohio State as additional justification for his firing besides his public comments.

One example is Michigan student and Teen Vogue author Tess Garcia who tweeted:

Things that are more horrendous than abortion:
-Jim Harbaugh’s coaching record
-Jim Harbaugh being the highest-paid public employee of the state of Michigan https://t.co/fnehUnj3uA

Tess Garcia is the perfect embodiment of the type of “sports fan” the modern sports intelligentsia wants to attract.

Among the articles she’s written for teenage girls while at Teen Vogue are “15 Best Vibrators You Can Buy Online” – which makes you wonder what dorm life at the University of Michigan is like during an exhaustive testing regimen like this.

Teen Vogue, of course, is infamous for its encouragement of teenage girls to participate in risky sexual activity and run many articles with headlines like, “How to Get an Abortion if You’re a Teen.”

They’ve even run articles about an “abortion comedy tour” telling young women abortion can be funny!

So the head coach who believes abortion is a travesty is brutally attacked, but publication like Teen Vogue who encourage minors to participate in sex get a free pass?

And it looks like Coach Harbaugh’s “last bastion of hope” is beginning to crumble.

Fortunately, Coach Harbaugh is not without defenders. Numerous life-long Ohio State fans have announced that they’re now proud to back the Maize and Blue. And U.S. Congressman Steve King (R-IA) tweeted:

Jim Harbaugh @CoachJim4UM beats Ohio State every time when the score is on the values imparted to those he leads. Maybe not a national championship but a culture that champions the value of Life. https://t.co/wuCukkq8vs

We’ll continue to keep you posted on any new developments.

Let us know your thoughts in the comments below!