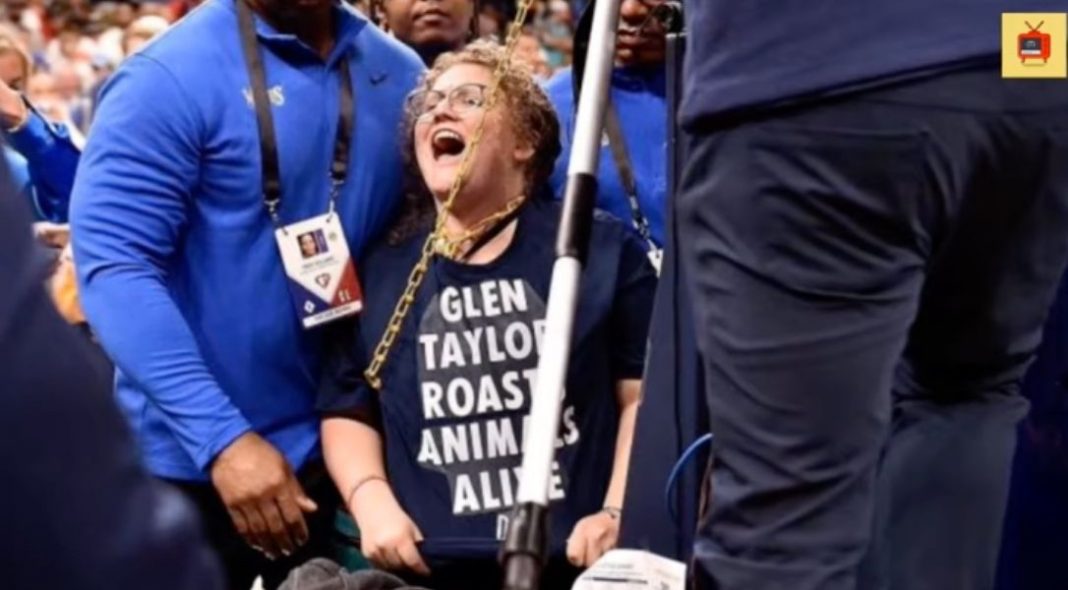 Is it too much to ask for a couple hours away from the craziness of the world through watching some sports?

Well, leave it to a Karen to ruin our only refuge from a crazy world.

And viewers were shocked when a crazy Karen chained herself to the basketball hoop during an NBA game.

Guys aren’t too hard to please.

Get a man a couch, a beer, and some sports and he will sit there for hours watching the game.

Sometimes all a man wants is to get away from life and sports are usually a great escape from the world.

That’s not to say there haven’t been interruptions to the games by protests.

Who can forget when protestors tried to burn an American flag during an MLB game in 1976 when Cubs’ outfielder Rick Monday saved the day by snatching the flag away from the protestors.

But it’s something about when a Karen tries to interrupt a game that just makes you even more pissed off.

We have all met that Karen who just can’t let others have something nice without trying to ruin it.

Well, meet the latest Karen who tried to stop an NBA game.

During a recent Timberwolves game that no one cared about, an animal rights protester decided to chain herself to the basketball hoop.

Wearing a shirt saying “Glen Taylor Roasts Animals Alive”, the abnormally large Karen tried to make herself unmovable during a free throw as she screamed at the court.

But in one of the funniest clips you will ever see at an NBA game, the oversized Karen was picked up by security and carried out like a sack of potatoes.

9pm: “I’m not going to drink that much tonight”

This is the second protest in a week against Glen Taylor, who is a billionaire owner of the Minnesota Timberwolves.

A woman attempted to glue her hand to the court during the Minnesota Timberwolves vs. Los Angeles Clippers play in game at Target Center. #Twolves pic.twitter.com/50QC1GtxVe

According to the group of Karens, Taylor also owns chicken farms and plans to kill some of his flock because of the bird flu outbreak.

Can you imagine hating life so much that you are willing to chain yourself to a basketball hoop to protect a damn chicken?