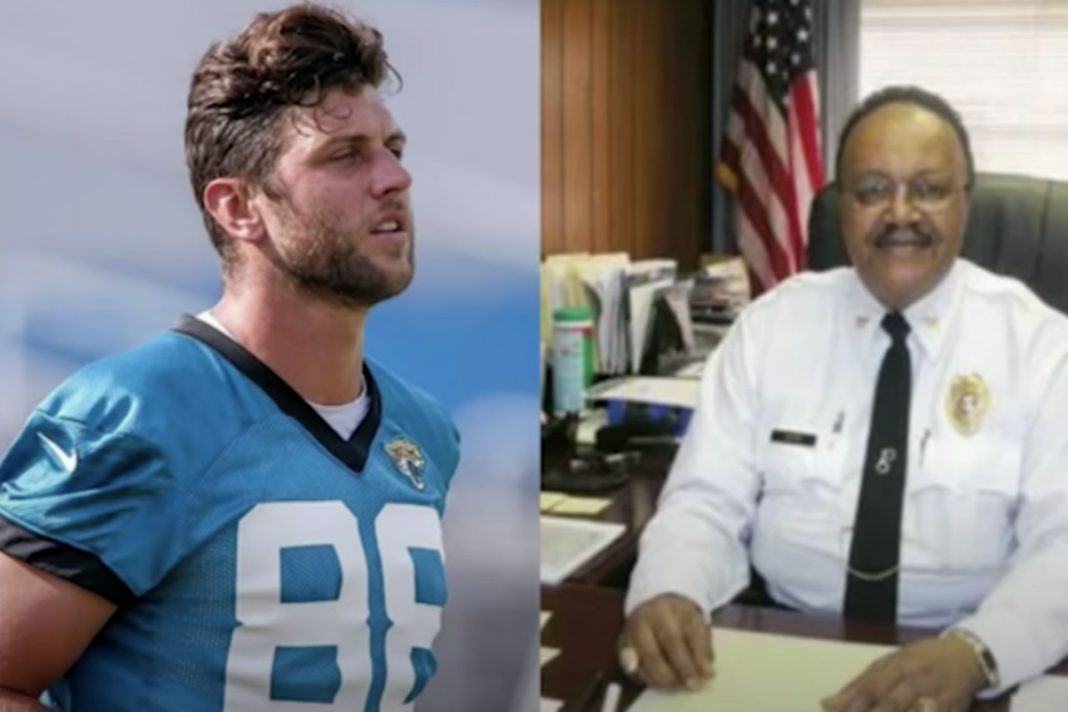 The NFL has sadly become super “woke” in the blink of an eye.

Players have been encouraged to wear social justice messaging on their helmets.

But “woke” sportswriters aren’t happy with how this NFL player chose to honor a victim of Black Lives Matter riots.

Jacksonville Jaguars tight end Tyler Eifert made a promise to honor murdered former St. Louis police chief David Dorn, and he made good on his promise.

Eifert put Dorn’s name on the back of his helmet for his team’s opener against the Indianapolis Colts.

Great win to start the season. Love being a part of this new team and community! It was honor wearing David Dorns name on my helmet today! #DUUUVAL pic.twitter.com/cJYtadhVuS

Dorn was a 77-year-old retired police chief who was protecting stores from being looted in the midst of nationwide Black Lives Matter riots.

Dorn was shot and killed by a looter who stole a television from a pawn shop.

Dorn’s wife Ann spoke at the Republican National Convention, one of the few moments his harrowing death had received any attention.

Dorn’s death is inconvenient for the Democrats and their pals in the press because he doesn’t fit neatly in their police narrative; Dorn was black, and his murder proved that the “mostly peaceful” protests have real consequences.

Eifert’s tribute to Dorn is in stark contrast to a lot of the social justice slogans emblazoned on the helmets and jerseys of NFL and NBA players.

In 2016, NFL players were not allowed to put the names of the five Dallas police officers murdered by a Black Lives Matter extremist, but since the league’s hard tilt to the Left, they couldn’t have denied Eifert’s request.

Meanwhile, players in professional sports continue to protest in the name of Jacob Blake, the alleged rapist shot by the police while resisting arrest in Kenosha, Wisconsin.

The victims of the leftist mob are often forgotten, but Eifert is doing his part to make sure that doesn’t happen.